If there is one thing artists are probably held to a higher standard, it’s the content of their music, and the society, more often than not, expects their lyrics to be powerful, rather than mere words. Are revolutionary comparisons between Burna Boy & Fela just? Burna Boy is one artiste who has grown ”twice as … END_OF_DOCUMENT_TOKEN_TO_BE_REPLACED

If there is one thing artists are probably held to a higher standard, it’s the content of their music, and the society, more often than not, expects their lyrics to be powerful, rather than mere words.

Burna Boy is one artiste who has grown ”twice as tall” in the last three years, not only because he is one the fan favourites, but because his lyrics are thought-provoking, addressing sociopolitical issues that face Nigeria and in some cases, the entire Africa.

This is why a lot of people were confused when former presidential candidate and political activist, Omoyele Sowore called Burna Boy out on social media, asking the self-acclaimed “African Giant” to live up to his title and do something physically revolutionary. To Sowore, this means joining Nigerians on the streets for a revolutionary new campaign that is scheduled for October 1st. However, the open rejection by the self-acclaimed “African Giant” was ”way too big”, expressing his lack of trust in Nigerian Politicians which in turn led to many outbursts from the “Twitter Nigeria” community, questioning his title as a “revolutionary musician”, compared to his biggest musical influence, the late legendary Fela Anikulapo Kuti.

Globally, creatives, sports icons, celebrities, and so on, have exercised their rights to freedom of communication to speak for or against different subject matters using their platform of influence. The Oxford dictionary defines “a revolutionary” has a person who advocates or engages in a political revolution.

Personally, I consider anyone advocating for the “greater good” or a “cause” as a revolutionary, and revolution is not trimmed to carrying placards and marching only; we all can be revolutionaries in our own lanes, inspiring hope, advocating for a better and more accountable society through diverse forms of artistic expression. Whether it’s a painting, song lyrics, music video, outfit, hand sign, interview, or any form of creative expression, or using influence and reach to upturn modern-day slavery like Samuel Eto’O did for Cameroonians in Libya, Bobi Wine’s political influence and rise to power in Uganda, Sportsmen/women/celebrities’ involvement in the #BlackLivesMatter movement and so on.

Burna Boy’s consistent, intentional and conscious efforts to advocate, enlighten and inspire music listeners about Africa’s history through his music, interviews, artworks, for greater causes beyond self, earns him every right to be called a revolutionary musician. The powerful messages in his African Giant album can attest to this with a massive worldwide audience listening. Numbers don’t lie, and the ratings can bear witness to Burna’s gospel.

Weaponizing music as a tool to advocate for accountability, change, education, and so on is revolutionary in all its right.

Are the revolutionary comparisons to his biggest influence ”Fela” just?

It’s popular knowledge that Burna Boy’s grandfather, the great music critic, Benson Idonije, once managed Fela. His deep connection with the Afrobeat legend is deep-rooted two generations before him. I can only imagine the stacks of Fela’s records in his family’s home and how much of an influence “Abami Eda” would have had on his ideals, music, and personality. Records can attest to a growing list of Fela samples on so many of his songs. Fela is arguably one of the biggest music exports in Africa, and his music is high in the ranks of most sampled. An influence that cuts across the different genres of music beyond the shores of Africa with many sampling records to back this claim. J. Cole (let Nas down), Missy Eliot (Whatcha Gon’ Do), Nas (Warrior Song), Obie Trice (spend the day), The Roots (I will not apologize), Yasiin Bey (Quite dogs bite hard), and the list goes on and on.

Fela was widely known for his political activism on the stage and off the stage. He aired his displeasures with every opportunity that presented itself about corruption, government oppression, apartheid, wayward post-colonial leaders, and more, through his music, interviews; he also led protests. A staunch believer of what he preached. However, his firm political activism didn’t come as a surprise because he was the son of a wealthy and well-read women’s rights activist Funmilayo Ransome-Kuti.

Personally, I believe the comparison is just enough regarding Burna’s politically conscious lyrics, reach, and global influence. Fela’s shoes are too big to fill even his offsprings can back me up on this statement. In the words of American film director Jim Jarmusch,” Nothing is original, steal from anywhere that resonates with inspiration or fuels your imagination. Originality is non-existent”.

When asked about the African Giant Album during one of his press releases: “a beautiful mélange of sounds… a pure, unapologetic African body of work [that] boasts of a global contemporary sound that is for everyone”.

In an interview with the Guardian: “The only people who I focus on, and who have blamed for whatever is happening now, is us – the youth,” he says. “Because we take what we get sitting down. Freedom is not something that is given.” 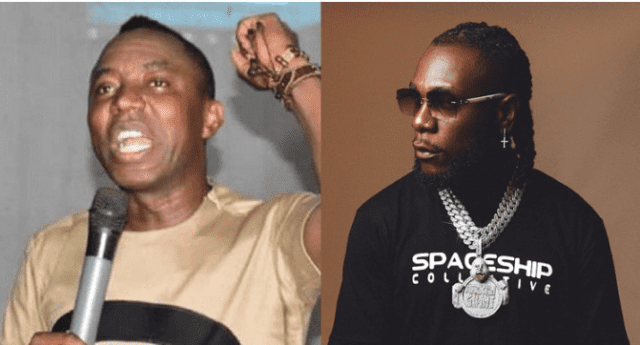 “I don’t trust politicians,” was Burna’s response to Sowore.

Isn’t Sowore amongst those who repackaged President Buhari to Nigerians?

In the words of Reno Omokri on a This Day Newspaper op-ed titled Sowore and Buhari: A Bromance Gone Sour! “Sowore dishonestly DEMARKETED then President Jonathan as a “DRUNKARD” a “SLOWPOKE”, “CLUELESS” and MARKETED General Buhari as an “INCORRUPTIBLE” man who would “CRUSH” Jonathan, and was “BETTER” than GEJ.”

Several people believe that without Sowore, President Buhari would not have become president.

So I openly ask these questions…

A wise man once said that before you judge another man’s decision, you need to put into consideration his options. Personally, Burna Boy’s achievements and how he is putting Africa and Afrobeats on the world map is commendable. He is a musical revolutionary in all its rights. As I bring the piece to an end, I advise that, in your attempt to pick up stones for your sling, please remember not to miss an African Giant because he is “Way too big”.

SEE ALSO: On Burna Boy & Sowore: What Can Be Done for Nigeria?

The post Are revolutionary comparisons between Burna Boy & Fela just? appeared first on Most Trusted Voice in Music & Afrobeats from Nigeria & Africa | Notjustok.