Robert A. Ellison Jr. started collecting ceramics in the 1960s and, in the decades since, helped transform the ways that ceramics are regarded and the histories that inform different traditions throughout the ages. Now 88 years old, Ellison has given momentous gifts to the Metropolitan Museum of Art, which since 2009 has acquired more than 600 works from his collection spanning several centuries. His latest donation of 125 works of modern and contemporary ceramic art figures in “Shapes from Out of Nowhere: Ceramics from the Robert A. Ellison Jr. Collection,” an exhibition and accompanying publication devoted to abstract and non-representational ceramics from the early 20th century to the present. On the phone with ARTnews, Ellison talked about the transition of his early interest from painting to ceramics, how he trained his eye, and how it feels to give his many decades’ worth of holdings away.

Where are you staying right now?
I’m in Greenwich Village in Manhattan, in a converted loft building. We got this place in 1990, so 30-some-odd years ago. My first loft was at Grand and Allen Streets. It was nice because it had two skylights, but it was a five-flight walkup, which I’m glad I don’t have to deal with now. I lived there for 25 years, but we were just renting that. My wife and I bought this place, and I think they’ll have to carry met out of here feet-first.

How would you describe your experience of the past year of lockdown?
Well, daily life has been turned upside-down, on its head. I think of myself as hiding under a rock. I’m not getting out very much. I’m 88. I’m not the oldest guy on Earth, but I’m not the youngest one either.

What do you think most distinguishes pottery from painting?
I think of ceramics as kind of in between painting and sculpture. It can employ some of both, with more flexible three-dimensional forms. People ask me, “Why ceramics?” And I say, “I don’t know.” But when I came to New York from Texas in 1962, I came here to be a painter. I painted pictures for 25 years, and I couldn’t get traction in the art world. But I was always taking breaks from the studio to go out and look in shops for ceramics. I started out not knowing anything, so everything I’ve learned has been self-discovered. When I first started doing this, in the ’60s, there were not many books on contemporary ceramics, so I just used my eyes to look and try to figure out who was interesting in what had been done. That pretty much guided me forever after. I have people I talk to, but mainly I don’t have advisers or a curator or an assistant or anything like that. I’m just one guy doing it all myself, the best I can.

How did you come to learn what you did? Even though there weren’t many books or materials, you became a ranking expert on a lot of the artists whose work you collect.
Well, fortunately, in 1972, there was a landmark exhibition at Princeton on American art pottery. Then, two years later, there was Paul Evans’s book Art Pottery of the United States. Those alerted me to what I’d been seeing and collecting, and then the cat was out of the bag. I’d been collecting American art pottery not knowing what it was. I had been trying to figure out for myself what was interesting and what was not interesting, and it took a while. Finally I got rid of the idea of quantity to get into quality.

When you started out, did you know any fellow painters at the time who shared your interest?
I influenced some people I knew to collect ceramics. I was a very good friend of Milton Resnick’s and his wife Pat Passloff for about two decades, and I introduced Milton to George Ohr’s work when I discovered it. I’d been collecting and thinking I knew everything about ceramics, but in 1974, I saw my first piece by Ohr in a friend’s antique shop and I was just bowled over. It was one of his little pitchers created from one piece that he pinched for a spout and pinched for a flange and cut a hole for a handle. I was really intrigued by that and started delving into his work. This this whole thing was instigated by my view of Ohr and his work. 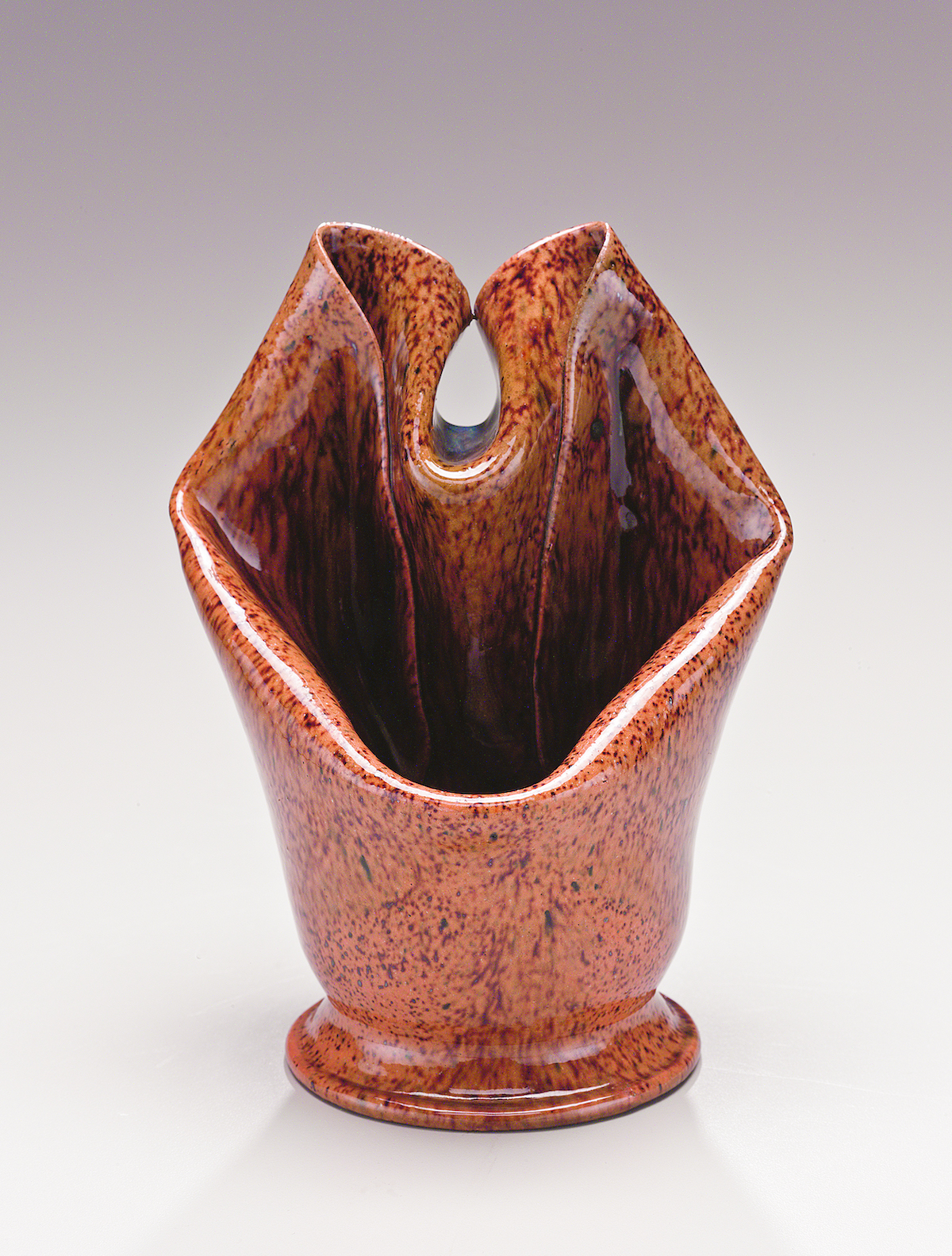 What about Ohr’s work was so formative for you?
He’s become known, but he was pretty much ignored during his lifetime. I tried to solve the riddles: What was his motivation? How could he have done what he did down in Biloxi, Mississippi, when he did, at the turn of the century? I tried to discover the origins of his inspiration, but I never could. I looked into ceramics history and art history, and the closest thing I found was maybe the Russian Constructivist work from the late 1910s. But that was two decades later than Ohr.

Do you remember what you paid for your first George Ohr work?
I have it written down somewhere, but I think it was probably $100 dollars or less.

What would a similar Ohr work be worth now nowadays?
It can go up to $100,000, but it depends a lot on the whim of a collector. Because his work doesn’t follow any particular pattern, it’s not been codified what a good piece of Ohr looks like. So everybody has their own view on what to pay.

As you later chronicled in your own writings on Ohr, he seemed to have at least a little notoriety in his time…
He was notorious, but nobody recognized that he was breaking ground in the history of ceramics. And if you don’t have any followers or people who are really involved with your work, what you’ve done doesn’t go anywhere. Just a few years after he died, Ohr’s work was forgotten. And it wasn’t until Peter Voulkos’s work came out to be similarly so non-representational, but he did that in the 1950s.

What to you was most distinctive about Voulkos when you came to learn about him?
A lot of it has to do with the timeline. Voulkos made his breakthrough as an extremely proficient potter on the wheel, throwing pots and mashing them together and making sculpture of it. That’s where the idea of form starts to change, with Voulkos taken as a focus after Ohr wasn’t. By then, Ohr had been dead for about 40 years. 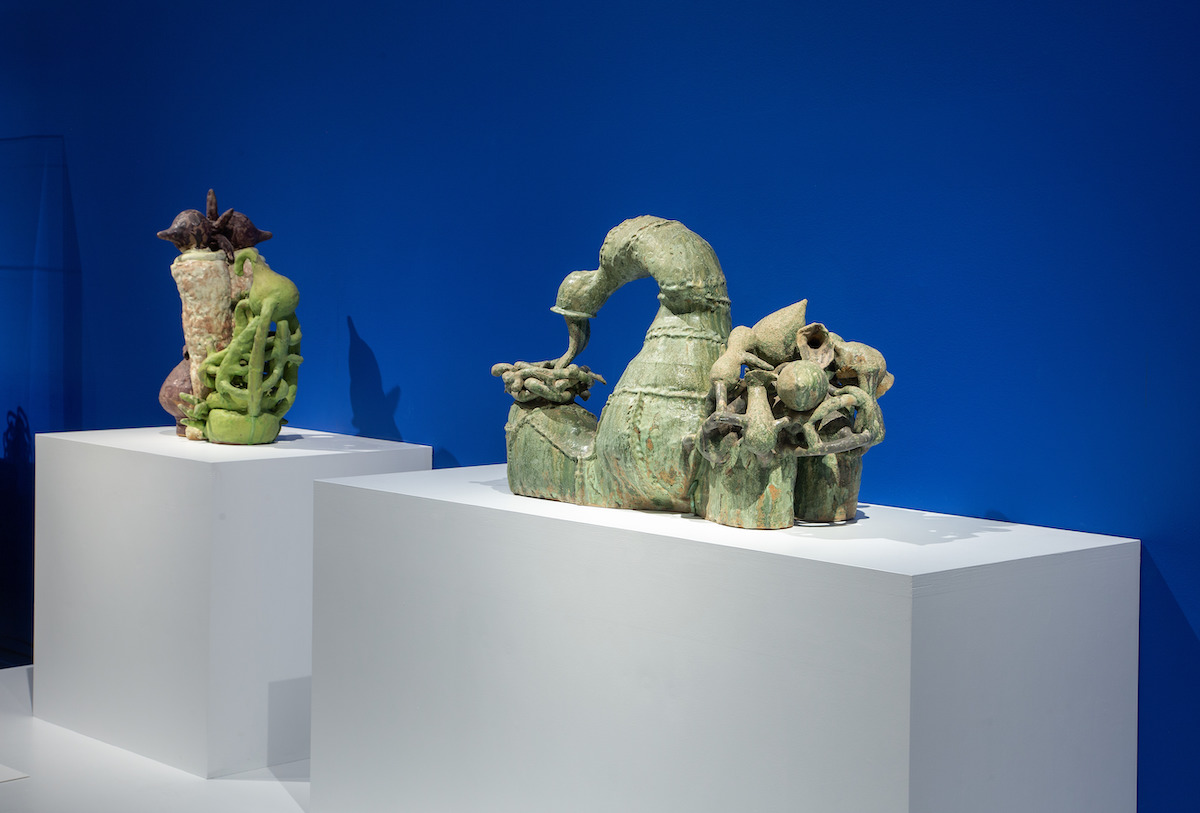 Works by Arnold Zimmerman in “Shapes from Out of Nowhere: Ceramics from the Robert A. Ellison Jr. Collection.”

How has your approach to collecting evolved over the years?
I’m a serial collector. I find one area of ceramic and collect it, understand it, and put it in context. When I learn all about that, then I move on to another area. In 2009, I gave 300 pieces of American art pottery to the Met. So I’m thinking of this current show and book as focused on what came after that.

How much or little do you live with works in your collection? Are there many around your home?
They accumulate on countertops until the countertops can’t hold anymore. I don’t plan ahead or figure out what to do with them, but fortunately I have connections at the Met who believe in my vision and have been eager to receive gifts of works. And fortunately I can afford to do that.

The Met is not a bad place to store your collection.
[Laughs] It’s great—it’s a satisfying ending.