Can a phone booth become an art space? That was the question artist Damián Ortega and Bree Zucker, director of New York’s Kurimanzutto gallery, had in mind when they organized “TITAN,” an exhibition in which 12 artists’ works are situated in phone kiosks on Sixth Avenue in Midtown Manhattan (through January 3).

The art spaces will be temporary in more sense than one. Sometime early next year, after the show ends, New York City, which took over ownership of the kiosks from the now-defunct Titan, will remove the booths, rendering obsolete what has long been an integral part of the city’s landscape. (In their place will be kiosks offering wifi.)

Choosing booths between 51st and 56th Streets was intentional. For Ortega and Zucker, the location represents an important “circuit” of the city, with the Museum of Modern Art and Radio City Music Hall, various public sculptures, and, most importantly, large corporate buildings all situated nearby.

“For us, this avenue is a microcosm and a perfect arena for study,” Zucker told ARTnews. “The location is far from arbitrary—it was an incision that was made into the map of Manhattan to highlight a specific artery of the city.”

Ortega added, “We couldn’t cover the city or all of Sixth Avenue, but we can do an acupunctural intervention.”

For the outdoor show, Ortega and Zucker have gathered together a significant group of artists, including Kurimanzutto artists Minerva Cuevas, Jimmie Durham, and Rirkrit Tiravanija, as well as Hans Haacke, Glenn Ligon, Zoe Leonard, Yvonne Rainer, Patti Smith, and Renée Green. Each artist has their own dedicated phone booth, which features their work on the three exterior sides of the kiosk, in place of advertisements. (The exhibition is also accompanied by its own dedicated website, which includes a map of where to locate each booth and an artist statement for each work.)

Many of the works in the exhibition are text-based, like Cildo Meireles’s which features some of the Beatitudes from the New Testament’s Gospel of Matthew. On one side, the sixth Beatitude is highlighted: “Blessed are those who hunger and thirst for righteousness, for they will be filled.” Anne Collier has retrofitted her 2011 series “Questions,”  handsome images that present the dictionary definitions (on color stock paper) of words like “evidence” and “supposition.” And Rirkrit Tiravanija is presenting big block-letter phrases like “Febreze for Fascism.”

Other artists repurposed some of their best known work for the show. Hal Fischer is presenting examples from his well-known 1970s photo-text series “Gay Semiotics,” and Jimmie Durham has created a simple map with a big red dot saying “You Are Here” (seemingly a reference to his ongoing “A Pole to Mark the Center of the World” series).

Though it feels attuned to the cultural climate of 2020, the outdoor exhibition’s development, including its use of old phone booths, predates the pandemic, as the show has been in the works for over a year. Its genesis began when Ortega last came to New York and visited Kurimanzutto’s Upper East Side gallery and the surrounding neighborhood. “TITAN” presented an opportunity, Ortega said, to allow artists to contribute to something that was not taking place digitally, particularly as the art world’s online fatigue has grown in the past few months.

“In a time where people are locked in their houses or isolated in their own spaces, this idea of coming together in the streets to see a show that you can see in the middle of the night is a direct response to the pandemic,” Zucker said. 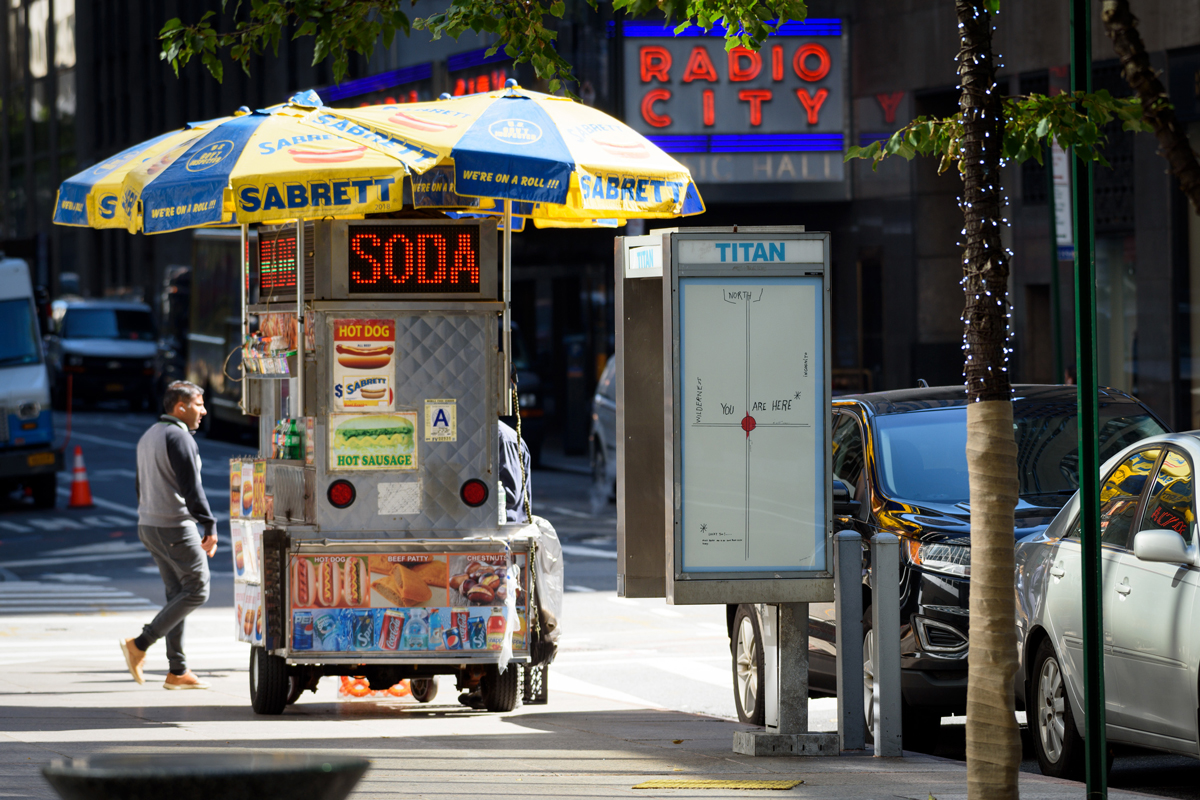 Though Kurimanzutto is now recognized as one of Mexico’s leading blue-chip galleries, Ortega said that this exhibition is a return to the gallery’s earliest days in the late 1990s and early 2000s, when its founding artists would stage exhibitions in non-conventional spaces—from a fruit market to an abandoned furniture store—across Mexico City.

“We were trying to escape the white cube and follow the energy of the city,” said Ortega, who was one the 13 artists that founded Kurimanzutto alongside its owners, Mónica Manzutto and José Kuri.

Zucker added, “There was this energy of a community, building a project together in a space that maybe hadn’t been yet understood or recognized as a space to show art. Rather than remain within the walls of the cabinet we had created in New York, there was this move to get back into the vein of the city, into the channel of communications.”

The phone booths were ideal spaces for the project because they “were already public-facing, but they were not noticed,” Zucker said. “They’re angles of space that were somehow invisible but are everywhere in the city, though they’re passed by without a real understanding of them being a space.”

Fri Nov 6 , 2020
All images © Slinkachu, shared with permission At first glance, Slinkachu’s scenes might appear to be a heap of multi-colored pills or a mess of children’s toys left behind on a London street corner. Closer inspection, however, reveals minuscule figures navigating human-sized items as if they occupy an alternate, miniature world […]