Eli Broad, a collector who dramatically reshaped Los Angeles’s art scene with a museum in his name and large financial contributions to top arts venues, has died at 87. The Eli and Edythe Broad Foundation, which oversees his collection, announced his death on Friday night.

“Eli saw the arts as a way to strive to build a better world for all,” Joanne Heyler, the founding director of the Broad, the L.A. art museum he opened in 2015, said in a statement. “He was a fiercely committed civic leader, and his tenacity and advocacy for the arts indelibly changed Los Angeles. He will long be remembered for his unmatched generosity in sharing the arts passionately and widely.”

With his wife Edythe, whom he married in 1954, Broad amassed a world-class collection filled with artists ranging from Jeff Koons to Kerry James Marshall. The Broads have ranked on the annual ARTnews Top 200 Collectors list each year since its inception in 1990.

While he was building that collection, Broad made sure to support L.A.’s biggest museums. He gave millions of dollars to institutions such as the Los Angeles County Museum of Art and the Museum of Contemporary Art Los Angeles, where he served as founding chairman, and he worked tirelessly to ensure that the city’s Grand Avenue area would become an art destination in the process. In 2017, he retired from philanthropy.

“There is no question that Los Angeles has become the contemporary-art capital of the world,” Broad told the New Yorker in 2010. “And MOCA and Grand Avenue are at the heart of our capital.”

Broad, who made his fortune in the home building and insurance businesses, initially drew his collecting inspiration from Edythe. Having frequented galleries in the city when they moved there during the 1960s, Edythe was “the first collector in our family, and then I came along later,” Eli once said. He also found a collecting model in Taft Schreiber, a vice president of MCA-Universal who owned significant works of modern art.

Eli Broad at the inauguration of the Broad in 2015.

During the ’70s, the Broads kicked off their collection by acquiring works in a similar vein to Schreiber, buying up pieces by Joan Miró, Vincent van Gogh, and Henri Matisse. Then, during the ’80s, they moved on to buying work by the biggest stars of the day. They purchased Cindy Sherman photographs from New York’s Metro Pictures gallery early on; now, the Broad museum has 127 works by her in its collection. Works by Jean-Michel Basquiat, Anselm Kiefer, and Eric Fischl were also added to their holdings, as did a number of works by Koons during the ’90s, including three of his most famous sculptures, Michael Jackson and Bubbles (1988), Balloon Dog (1994) and Rabbit (1986).

In the decades that followed, the Broads were known to make major purchases at auction. In 2005, for example, with their longtime dealer Larry Gagosian working on their behalf, the couple bought David Smith’s nine-foot-tall steel sculpture Cubi XXVIII (1965) for $23.8 million at Christie’s, setting a record for the Abstract Expressionist. They also set a record for Sam Gilliam in 2016 when they bought one of his paintings for $11.8 million.

If during the ’80s their collecting habits had at one point been riskier, with an emphasis on artists whose market depth was relatively limited, the Broads have since placed an emphasis on the biggest names in Modern and Contemporary art. “Today, we are not aggressively looking for artists who have not been shown in museums or major galleries,” Eli told ARTnews in 2015. “We were doing that back in the East Village days, and in SoHo in the ’80s and early ’90s.”

The Broad, the couple’s $140 million Diller Scofidio + Renfro museum, opened in 2015. Today, the museum owns around 2,000 works. Upon its opening, some accused the museum of catering to the tastes of the market. “It’s mainly rich in blue-chip art, defined by market value decided through consistent years of sales and confirmed at auction,” Los Angeles Times critic Christopher Knight wrote of the collection.

But even the museum’s detractors had to admit that its grand building allowed the institution to mount presentations of monumental art that other museums might have trouble presenting. Such an oversized space has enabled the museum present an “Infinity Room” by Yayoi Kusama and an 82-foot-long painting by Takashi Murakami, and to offer exhibitions such as “Soul of a Nation: Art in the Age of Black Power,” a blockbuster exhibition that has been seen at Tate Modern and the Brooklyn Museum, among other venues.

Eli Broad was born in 1933 in the Bronx, New York, to Lithuanian Jewish immigrants. He was raised in Detroit, and he attended Michigan State University. After college, he worked a series of odd jobs before founding an accounting firm with Donald Bruce Kaufman.

With Kaufman, he later formed a homebuilding business. It was listed on the New York Stock Exchange by the time Broad left it in 1974. And in 1971, Broad acquired SunAmerica, an insurance company. Both businesses became Fortune 500 companies. 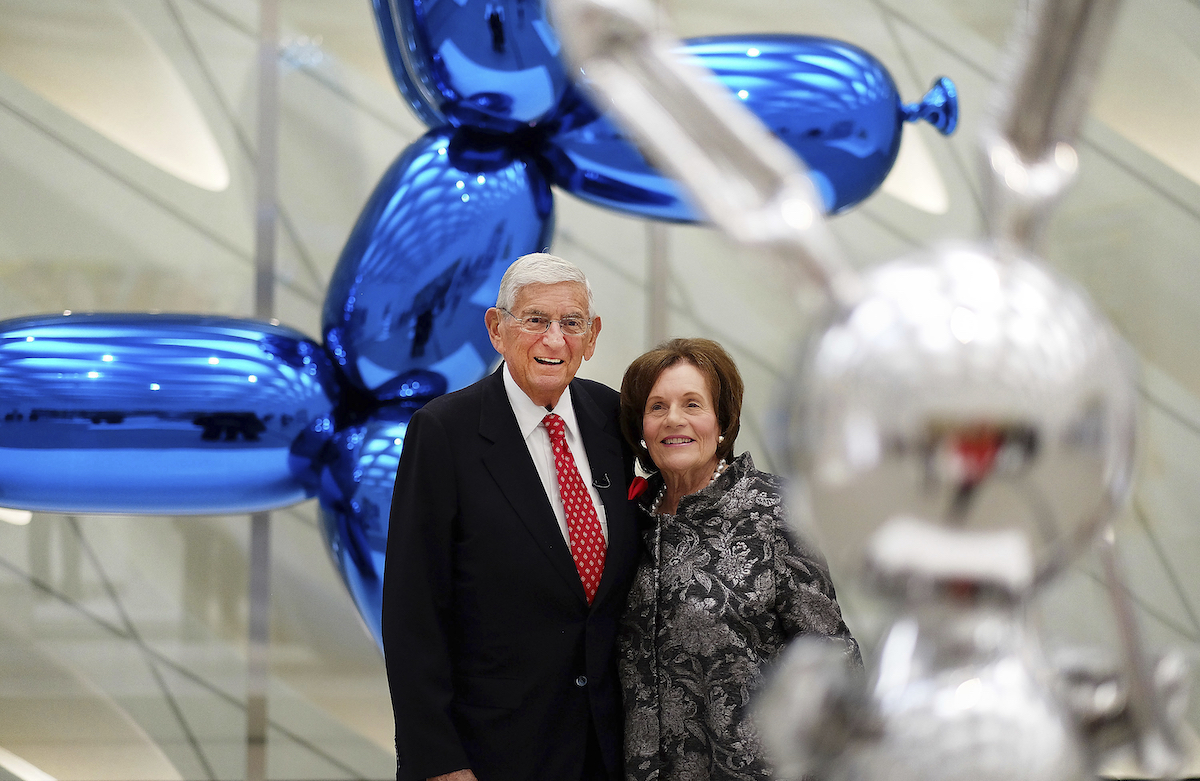 Eli and Edythe Broad with a work by Jeff Koons.

During the ’70s, Broad got involved in MOCA, a project spearheaded by collector Marcia Weisman and a group of artists based in the city. Broad oversaw a capital campaign that raised $13 million for the museum, which was founded in 1979, and he donated $1 million himself toward the effort. In 1983, MOCA secured the 80-work collection of Giuseppe Panza di Biumo, including works by Robert Rauschenberg and Mark Rothko, in a deal that cemented the museum’s status as an institution worth watching.

During the ’80s, Broad’s relationship with the museum began to sour. In 1984, when he and the museum’s other trustees came to blows over Broad’s goals for MOCA, including the possibility that the museum would bear his name, the collector resigned from the board.

Behind the scenes, Broad was a contentious figure, asserting firm demands for the institutions with which he was involved. In 1998, Broad reportedly attempted to form his own art center at the University of California, Los Angeles with some of the funds gained from the sale of a Leonardo da Vinci manuscript owned by the school’s newly acquired Armand Hammer Museum. (He denied having made this request in the New Yorker profile.) Ann Philbin, the museum’s director, convinced other trustees not to allow this to come to fruition, and Broad resigned from the board.

In the 2000s, Broad made plans to donate his collection to LACMA, where he wanted his own museum with its own set of trustees. Broad agreed to foot the $56 million construction bill, but not the endowment for the new institution, to be titled the Broad Contemporary Art Museum, generating opposition from board members.

In 2008, just as the museum was about to open, Broad made the surprising declaration that he was no longer donating his collection to LACMA. Instead, his foundation would loan works to LACMA. To make matters worse, the museum was not well-reviewed—the New York Times labeled the Renzo Piano–designed building “architecture without conviction.” That same year, Broad left the LACMA board.

Also in 2008, Broad helped bail out MOCA, which was on the verge of financial collapse amid a dwindling endowment, a plan to raise $50 million toward the erection of a new building, and a recession. With MOCA seeking a merger with LACMA, Broad penned a Los Angeles Times op-ed in which he wrote that his foundation would donate $30 million. “MOCA is one of our city’s cultural treasures, and it would be tragic both for the cultural health and civic reputation of Los Angeles if this institution ceased to exist,” he wrote.

Many have viewed the Walt Disney Concert Hall, a performing arts venue not far from MOCA, as one of Broad’s greatest successes. In 1996, he began a $300 million fundraising to build it, with architect Frank Gehry set to design the structure. It was ultimately opened in 2003 and is now considered an iconic L.A. site.

Yet Broad’s patronage extended beyond L.A., too. In 1991, Broad endowed a business school and a graduate school at Michigan State University in East Lansing, his alma mater. Then, in 2007, they gave $26 million, plus another $2 million in 2010, toward the formation of an art museum at the school. Zaha Hadid was enlisted to design the museum, which resembles a slightly squashed rectangle pitted on a diagonal.

In 2017, having virtually transformed L.A. with his arts patronage, Broad announced that he was retiring. He told the New York Times, “Every time I’ve stepped aside in the past, I haven’t missed it.