As galleries and collectors alike continue to adjust to buying and selling art online more than a year into the pandemic, Art Basel launched the first of its 2021 Online Viewing Rooms, which opened to VIPs on March 24 and runs until March 27.

In the past year, Art Basel has expanded its OVRs beyond just replacing its three staple fairs—in Hong Kong, Basel, and Miami Beach—with adding thematic editions focused on specific art-historical periods. Previous editions were devoted to 20th-century art and art made only during 2020. This iteration takes the title of “Pioneers,” and features 100 galleries from around the world, all of which are able to show only eight works at any given time. (As in past editions, galleries are able to swap out works as the fair progresses.)

The art on view in “OVR: Pioneers” centers around artists who have “broken new aesthetic, conceptual, or socio-political ground,” as defined by the galleries, and ranges from major historical art figures to emerging artists who have become acclaimed for pushing the boundaries of art. In a press conference earlier this week, Noah Horowitz, Art Basel’s Americas director, said, “One of the great things with this viewing room is the historical nature of some of the work on view. It’s easy to assume that in a digitally native realm, everything noteworthy was created yesterday. That’s certainly not the case on our platform.”

[As galleries continue to weigh the benefits of art fairs, can Art Basel draw them back?]

With this online edition of Art Basel, dealers reported steady sales and spoke highly of the improved online platform, which allowed for galleries to upload videos. (A similar feature was the highlight of the online version of FIAC, which happened earlier this month.)

“Art Basel’s OVR: Pioneers started with a thoughtful premise,” Gleason said. “The platform allowed us to show video of these works in a way that has not been done before, which is crucial in order to understand the kinetic nature of the sculptures.”

One of the main through-lines was a focus on pioneering women artists, whose artistic contributions have often been either long overlooked or sidelined within the canon. Los Angeles’s Roberts Projects titled its Pioneers presentation “Dark Times: Betye Saar Washboard Assemblages 1997–2015,” and it assembled the artist’s well-known mixed-media sculptures from 1997 and 1998, along with two more recent examples from 2015. During the VIP preview, the gallery sold both of the 2015 assemblages—Banjo Boy and Dark Times—for $150,000 each.

“Art Basel OVR: Pioneers is quite unique in that is it a platform driven by a rigorous curatorial lens which informs the exhibition as a whole,” Julie Roberts, the gallery’s cofounder, said in an email. “When developing our online exhibitions, we take a focused representation of the gallery program, rather than a more generalized overview. The critical context provided by Art Basel’s framework is important to us, and our artists, as it enhances the overall viewing experience.”

Galerie Lelong & Co. offered the work of four women artists from its roster—Ana Mendieta, Carolee Schneemann, Nancy Spero, and Mildred Thompson—for a group presentation called “Legacies.” The gallery made two works by each artist available, ranging from drawings to multi-part photographic suites to mixed-media sculptural works. The gallery sold Schneemann’s Study for Up to and Including Her Limits (1973), a photograph of a famed performance by the artist shot by Anthony McCall, for $35,000.

“We’ve long been leaders in working with women artists and consequently, after their deaths, their Estates,” Mary Sabbatino, the gallery’s vice president/partner, said in an email. “Concentrating on this aspect of the gallery’s program seemed a good fit with the celebration of Women’s History Month and our solo exhibition of Mildred Thompson. In addition, three of the artists in the OVR were closely aligned. Mendieta, Schneemann, and Spero all knew each other in New York and sometimes exhibited together.”

Similarly, Chicago’s Kavi Gupta gallery sold Deborah Kass’s monumental 1997 work Seven Ghost Yentls (My Elvis) for $350,000 to a private Canadian museum. “We have received an incredible response from the global arts community in celebrating this crucial body of work from Deborah Kass,” Kavi Gupta, the gallery’s founder, said in an email. “We’re pleased to see that collectors are so enthusiastically embracing 2021.”

Blum & Poe, which has locations in Tokyo, Los Angeles, and New York, sold several works by the later American painter Robert Colescott, known for his satirical figurative paintings, each for a price of $195,000. The gallery’s founder Tim Blum said that the gallery had “placed most of the works on offer to a global audience, ranging from collectors who own the artist’s work in-depth to collections who are new to the artist and this period of work.”

Other sales of historic work included Claes Oldenburg’s Notebook Page: Study for Sculpture in the Form of the Alphabet Good Humor Bar (1972), which was offered in the range of $100,000–$150,000 by New York’s Paula Cooper Gallery. The Copenhagen outfit Galleri Nicolai Wallner sold Poul Gernes’s four-part panel painting Untitled (dot painting), 1966, for $110,000 to a private European collector. São Paulo’s Bergamin & Gomide gallery had sold two drawings on rice paper (from the 1960s–’70s) from its solo presentation of Brazilian artist Mira Schendel to a U.S. collection, with its sales totaling in the range of $100,000–$150,000.

On the more recent side of things, several galleries presented work made in the past few years. L.A.’s David Kordansky Gallery presented new “Pour and Puddle” paintings by Swiss artist John Armleder, who will be the subject of a major survey at the Rockbund Art Museum in Shanghai opening later this year. In total, the gallery sold five works by Armleder—two “Puddle” paintings (Pédatifide and Two Strictions) and three “Pour” paintings (Inner Planets, Tiroles, and Striction) for $110,000 each.

“Our strategy of curating a solo presentation of new paintings by John Armleder, paired with extensive behind-the-scenes videos of the artist making these works in his studio, generated an immediate and enthusiastic response from collectors who moved quickly to acquire these rare, medium-format examples of the artist’s iconic Pour and Puddle Paintings,” Michelle Pobar, a sales director at Kordansky, said in an email. 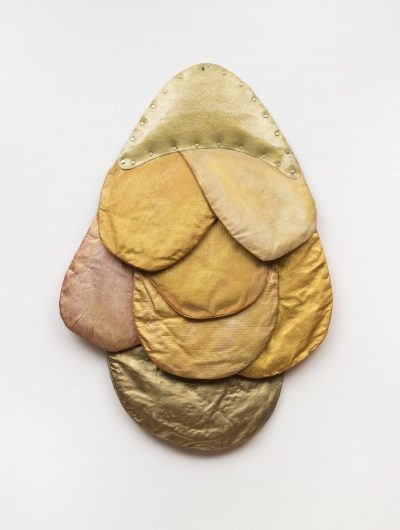 “Art Basel Pioneers was a great opportunity to show side by side Jac Leirner and Leda Catunda, artists from the same generation whose radical practice is on one hand an antithesis yet equally pivotal in its approach and influence,” Alex Gabriel, Fortes D’Aloia & Gabriel partner director, said in an email. “It’s a concise presentation which seeks to highlight the singular language both artists have developed over the years. We have had a strong response to the works, that includes both historical pieces from the 90s to recent work.”

San Francisco’s Jessica Silverman Gallery had created a presentation showcasing eight new sculptures by Matthew Angelo Harrison, who was included in the 2019 Whitney Biennial. The presentation also mimics the synergy between fair booths and museum exhibitions that is often seen during the Swiss edition of Art Basel, as Harrison’s exhibition is meant to serve as a preview for his solo show in June at Kunsthalle Basel, one of the institution’s most coveted exhibition slots as it coincides with the fair.

In an email, Jessica Silverman, the gallery’s founder, said that they had sold three of Harrison’s works—including Relic for Disruption I (2021), a 7.5-foot sculpture of a spear incased in tinted polyurethane resin, for $40,000—and were still finalizing further sales. “It is harder to sell sculpture than painting or photography online, but Art Basel is one of the few fairs with the gravitas to encourage collectors to take a longer, more careful look,” she said.