In New York, during the ’70s, the city’s rich gallery scene was dominated by a handful of galleries, including Leo Castelli, Ileana Sonnabend, Pace, Ronald Feldman, and Marlborough. Later on, during the ’80s, Mary Boone, Paula Cooper, Marian Goodman, and Larry Gagosian would join their ranks. These galleries represented the day’s top artists, from Jasper Johns to Andy Warhol, and almost all of the solo exhibitions at these spaces were devoted to white artists. At the time, to be an artist of color in one of these galleries’ stables was unusual, if not extremely rare.

The severe racial disparities affecting the New York scene occasioned a conversation in 1974 between Linda Goode Bryant, then the director of education at the Studio Museum in Harlem, and artist David Hammons. Hammons, who is now widely known for his sculptures making use of ready-made objects in service of koan-like statements about Blackness and visibility, had not yet hit big—he had had two solo shows in Los Angeles, and none in New York. Bryant was familiar with his work already, and asked Hammons why he didn’t show in the city. He responded, “I don’t show in white galleries.” Almost immediately, Bryant knew she had to remedy that.

The gallery that she formed, Just Above Midtown (JAM for short), was opened in 1974 at 50 West 57th Street, in a district filled with white dealers, and it became a haven for Black artists. Many of these artists—among them Hammons, Lorraine O’Grady, Senga Nengudi, and Howardena Pindell—have gone on to achieve success in recent years. Although JAM rarely made major sales in its 12 years, the gallery acted as a crucial node within an ecosystem of Black artists, offering the kind of support that the Castellis and Paces of New York were rarely affording them at the time.

Most importantly, the gallery embraced a venturesome spirit, refusing to commit to a singular aesthetic or a kind of art-making that could easily be commodified. Thomas J. Lax, a Museum of Modern Art curator at work on an exhibition about JAM, said in an interview, “It was creating a space for Black folks to experiment, to not know, to be uncertain.”

The scene at Just Above Midtown in 1978.

O’Grady’s most famous artwork is not an object but a persona—Mlle Bourgeoise Noire, a fictional beauty queen who crashed art-world receptions and opined about the state of Black art. Though often best-remembered for her appearance at a New Museum of Contemporary Art event in 1981, Mlle Bourgeoise Noire had actually debuted one year earlier at a JAM opening. She arrived at the gallery wearing a dress festooned with white gloves, and she began flagellating herself with a whip—a reference to the kind of weapons used by slave masters—that she had decorated with chrysanthemums. “BLACK ART MUST TAKE MORE RISKS!!!” she told the crowd at JAM. 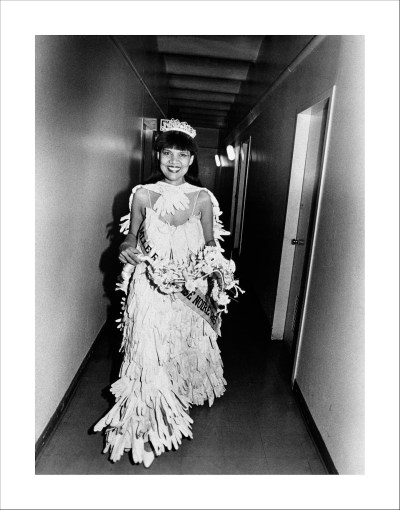 Although Mlle Bourgeoise Noire was not officially a JAM-sanctioned work, it shared the sensibility of the offbeat, conceptually rigorous, and difficult art that was being shown within the gallery’s walls. A glance at some of JAM’s other offerings evinces a similar sensibility. Nengudi debuted her most famous works at the gallery—her “R.S.V.P.” sculptures, made using pantyhose that is slung up with sandbags—and performed as well there, contorting her body in mysterious ways. Pindell showed her hole-punch abstractions resembling sprays of confetti at a time when the Studio Museum questioned the value of non-figurative painting, and Hammons exhibited some of his earliest works made using paper bags, grease, and wire. Musician and critic Greg Tate edited the gallery’s journal, Black Currant (later known as B Culture), and filmmaker Camille Billops produced an issue with the help of Hammons. At JAM, all mediums were welcome. As debates about what, if anything, constituted a “Black aesthetic” raged on, the gallery’s programming asserted that there was no one way for Black artists to work.

Despite the difficult—and, in some cases, ephemeral—nature of all this art, Bryant and her staff worked tirelessly to make sure some of it sold, at one point even organizing an events series with the hope of building a Black collector base. Rigorous conceptual art such as this was being shown all around New York at the time; Black artists just typically weren’t given the opportunity to exhibit theirs.

“Primarily it was about allowing African American artists to function on the same platform equal to their white counterparts,” Bryant said in a 1994 interview of the gallery’s location and ethos. “To have been in Harlem or Bedford-Stuyvesant would not have afforded that. It was to get consideration in the context of the larger art world.” 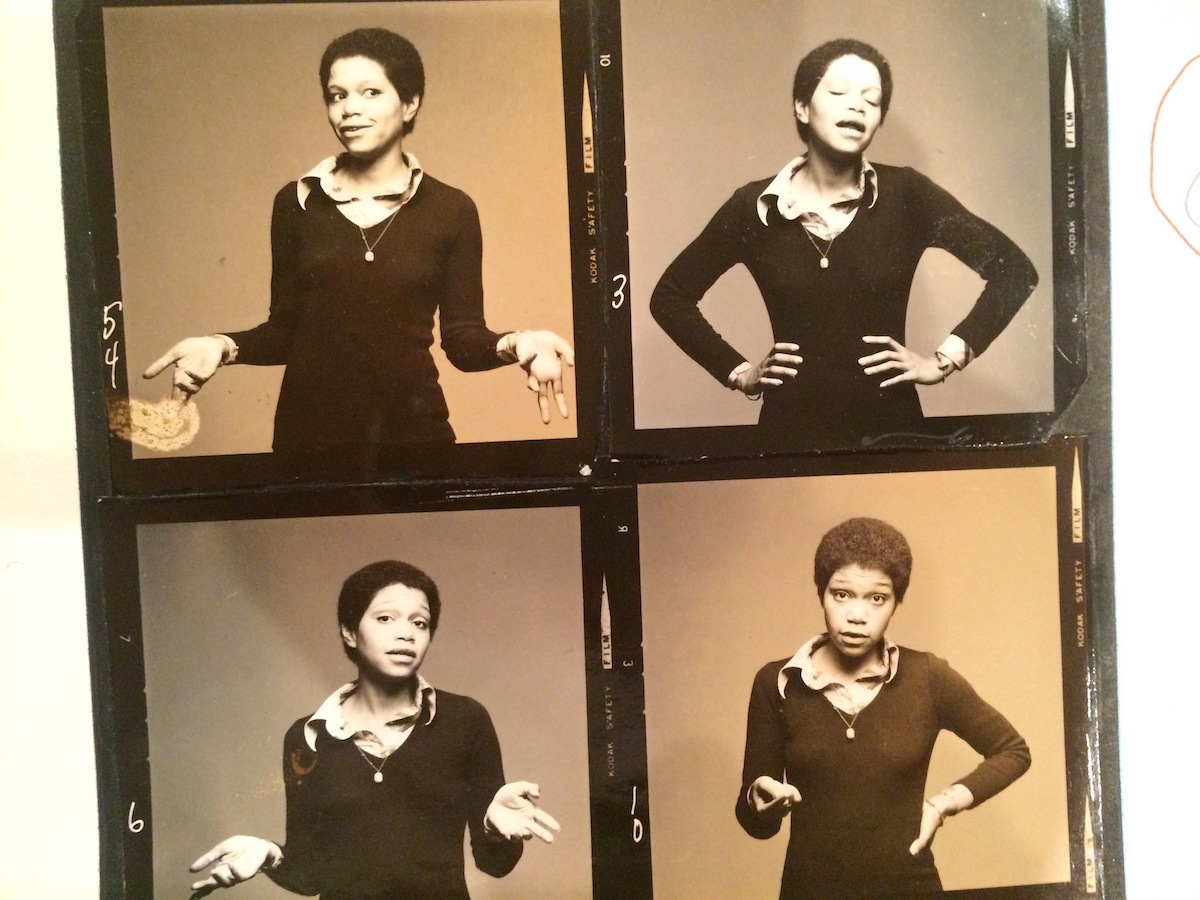 In some ways, the beginnings of JAM lie in Bryant’s time spent in the New York museum world. When Bryant came to New York in 1972, she got a job as a fellow at the Metropolitan Museum of Art. Then, when she had “had enough of cocktail parties in 1973 and hanging around white folks,” she left to go work at the Studio Museum in Harlem, then a newly founded institution that was still finding its footing.

Though the Studio Museum is now widely praised for its willingness to show all kinds of art by artists of African descent, it wasn’t always that way, and when Bryant worked there as director of education, the museum was less willing to show abstract and conceptual art by Black artists. Aiming to exhibit and support the kind of art the Studio Museum wouldn’t show, she decided to strike out on her own, and while still employed by the museum, she founded JAM. (Bryant has said she was later fired from the Studio Museum for refusing to take part in a Yoruba ceremony.) 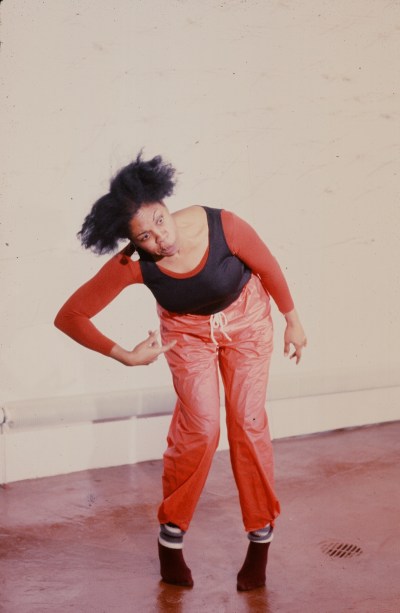 Senga Nengudi performing at Just Above Midtown in 1981.

When Bryant first told her friend, the artist Romare Bearden, about her plans for JAM, he explained that she would need $50,000 to launch a gallery—and she didn’t even have close to that much money for it. Still, she was determined to make it all work. She secured loans from her family and the furniture collector Andy Owens, and she got to work renovating her 724-square-foot space, laying down the parquet floor herself with curator Lowery Stokes Sims, who had been Bryant’s colleague at the Met and would go on to lead the Studio Museum decades later.

Some, including the broker who helped Bryant find JAM’s space, raised doubts about whether the gallery would succeed. Would people really come to a gallery devoted to Black art, her white colleagues wondered? More importantly, could she really pay the gallery’s $1,000 monthly rent? In spite of the fact that the gallery was just barely scraping by, Bryant made ends meet. As Lax put it, “She was broadcasting that this was a place to pay attention to within the existing art world.”

On opening night, the gallery was packed. “If you were in the arts, theater, film, dance, or whatever, you were there for the opening of JAM,” Bryant said in a Bomb interview. “The energy of JAM really started that night.”

JAM didn’t remain a gallery for long—Bryant quickly transitioned it into a nonprofit, realizing that that mode was a better fit for the hard-to-sell art she wanted to show—and in 1978, after just a few years in 57th Street, JAM moved downtown to Tribeca, where it remained until it closed in 1986.

“I decided that there was an increased push in the art market toward the commodification of artworks, and I was not really interested in that,” she told ARTnews in 2019. Bryant has since taken up work as a filmmaker and an activist, with her most recent effort being Project Eats, an urban farming initiative focused on Black and Brown communities. 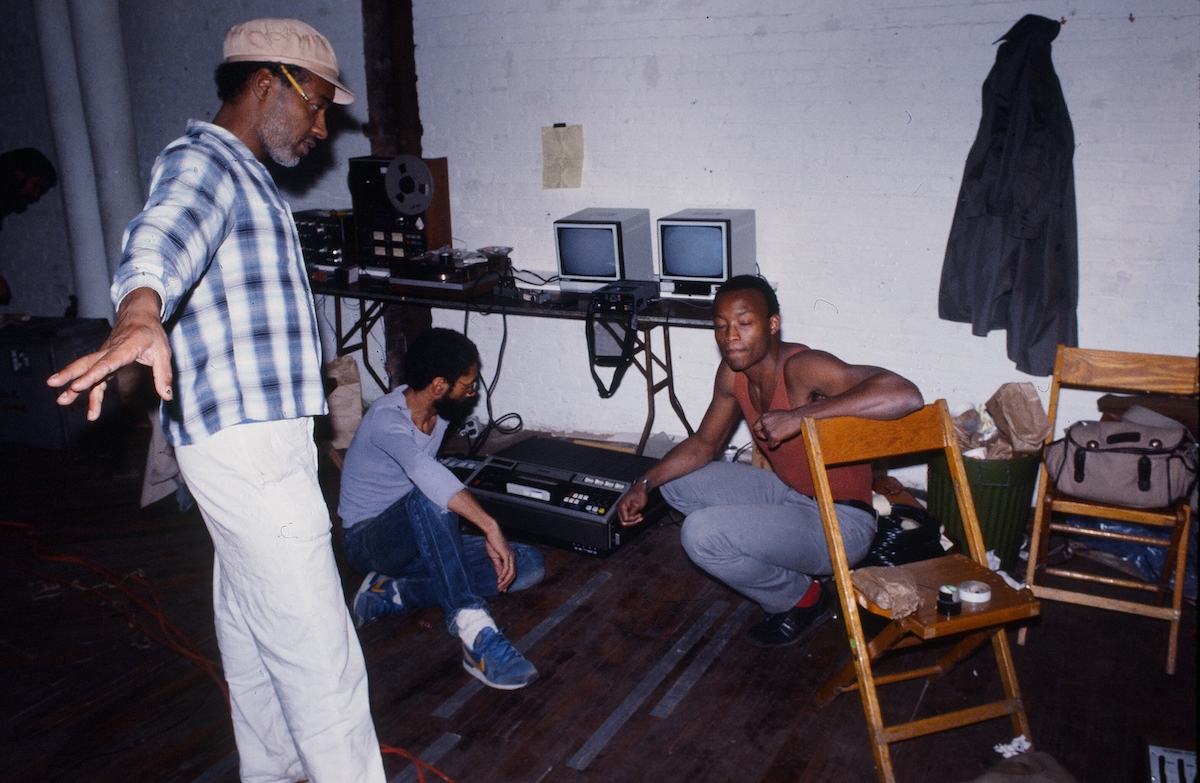 David Hammons (at left) at Just Above Midtown in 1983.

JAM’s public-facing offerings were its exhibitions and its events, but the gallery was just as important for its exhibitions as it was for the ways it brought numerous Black artists together, forming a close-knit community. Stevie Wonder was a regular at the gallery, where his music was a favorite among staffers, and the dancer Bill T. Jones regularly did performances there. The singer Roberta Flack was known to collect work by an artist named Kapo, and she ultimately footed the bill for a show of his work at the gallery. Dawoud Bey, who shot photographs of performances held at JAM, ended up marrying his former wife, the artist Candida Alvarez, in the gallery. Bryant has often referred to those in the gallery’s orbit as “family.”

As O’Grady once wrote, “JAM was a place as much as a world, a place where people ate together, discussed and argued, drank and smoked together, collaborated on work, slept together, pushed each other to go further, and partied ’til the cows came home.”