Peter Blake, whose storied six-decade career continues to evolve, is one of Great Britain’s foremost artists. Known as Sir Peter Blake since being knighted in 2002, he helped establish Pop art in England, where the movement took on distinctive qualities of its own while coinciding with the rise of American Pop in the 1960s. And as befits a Pop pioneer of his stature, Blake ranks in an uncommon class of artists whose notoriety has roamed beyond the confines of fine art—most notably into the realm of music, thanks in part to his iconic cover art for the Beatles’ Sgt. Pepper’s Lonely Hearts Club Band. At the age of 88, Blake has long been the subject of tributes and testimonies, and a new book—Peter Blake: Collage, forthcoming from Thames & Hudson in June—offers a monographic survey of decades’ worth of work in one of his favored mediums, with a forward by Blake’s old school-days friend, David Hockney, and an essay by Patrick Elliott, senior curator at the National Galleries of Scotland. The publication of the book will also be accompanied by “Peter Blake: Time Traveller,” an exhibition of new and old works—including significant museum loans—at Waddington Custot gallery in London. In advance of all this attention, below is a guide to Blake’s rise.

He broke out in the important historical group show “Young Contemporaries.”
Blake’s first big showing was in “Young Contemporaries,” an annual exhibition whose 1961 incarnation at the RBA Galleries of the Royal Society of British Artists included Blake’s Self-Portrait with Badges, a cheeky painting of Blake in pointedly casual garb with an Elvis Presley fan magazine in his hand. As described by Tate, which holds the painting in its collection, the painting “shows his interest in America with objects such as the denim jacket (rare in Britain at the time), baseball boots, badges, and the magazine dedicated to Elvis Presley, who had just become well-known in Britain. Blake uses these items like a 17th-century portrait painter, to suggest his interests or achievements.”

He was featured in the seminal film Pop Goes the Easel.
Not to be confused with the early Three Stooges film from which its title derives, Pop Goes the Easel was a formative documentary directed by Ken Russell that introduced much of England to certain merry pranksters of Pop art in 1962. Conceived as part of the BBC’s arts-programming series Monitor, the film focuses on Peter Blake as well as Derek Boshier, Pauline Boty, and Peter Phillips—four young artists, as introduced by the BBC’s Huw Wheldon in deliciously discursive high-English diction, “who turn for their subject matter to the world of Pop art, the world of the popular imagination, the world of film stars, the Twist, science-fiction, pop singers—a world which could be dismissed, of course, if you’re feeling so inclined, as being tawdry and second-rate, but a world, all the same, in which everybody, to some degree, anyway, lives, whether we like it or not.” Blake is described at the start as the leader of the pack and features in scenes that include carnival-going and lying in bed while dreaming of Brigitte Bardot. Few documents compete in terms of giving an early sense of what “Swinging London” must have felt like. 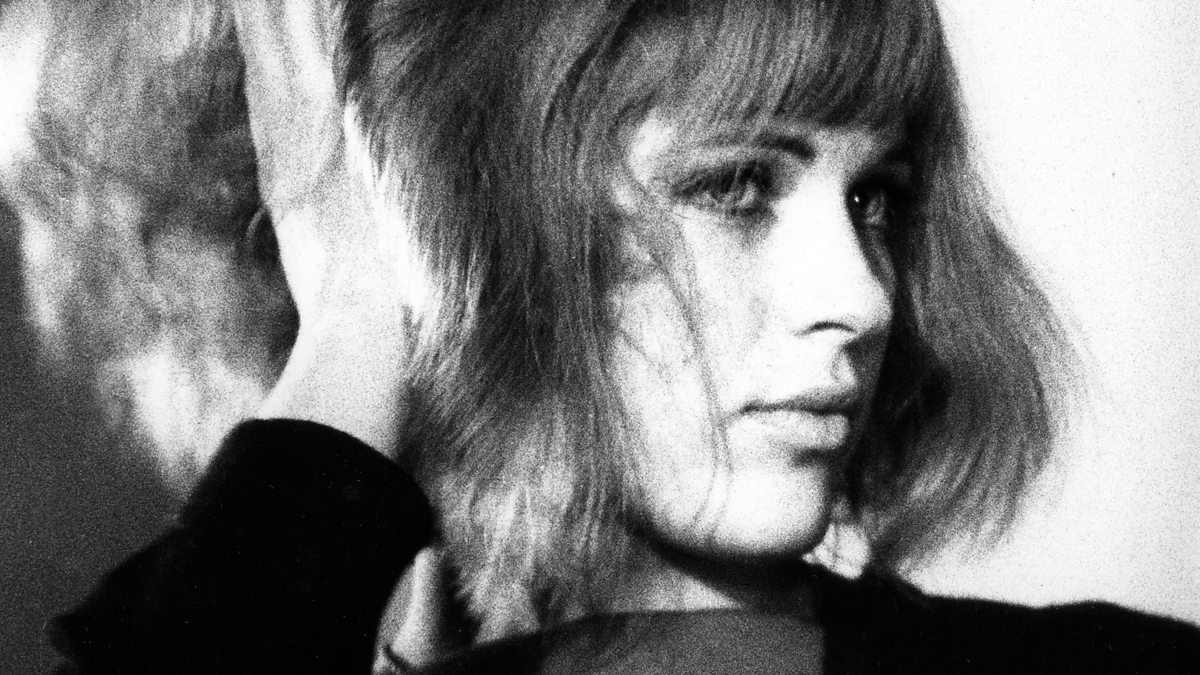 A still from Pop Goes the Easel.

His art adorned the cover of Sgt. Pepper’s Lonely Hearts Club Band.
Few cultural creations can be said to have made more of an impact than Sgt. Pepper’s Lonely Hearts Club Band by the Beatles, who evolved from bouncy-banged teeny-bop stars to countercultural figureheads in the span of just a few short years. The album’s musical density is well-documented—as is that of the collage crafted for the cover by Blake in collaboration with American Pop artist Jann Haworth. The image focuses on the Beatles in the center, surrounded by a formidable cast of cultural heavies whose ranks include Aleister Crowley, Lenny Bruce, Karlheinz Stockhausen, W. C. Fields, Carl Jung, Fred Astaire, Bob Dylan, Dylan Thomas, Wallace Berman, and many more. 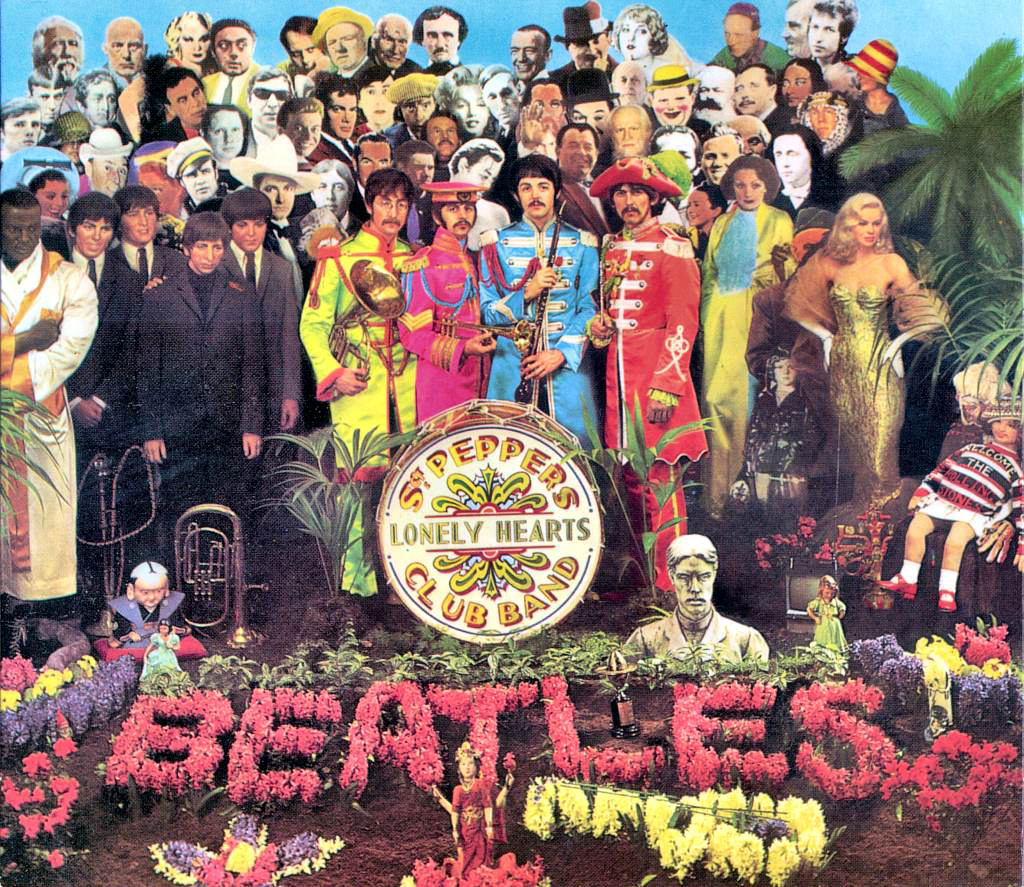 The cover for Sgt. Pepper’s Lonely Hearts Club Band by the Beatles, from 1967.

He made other album art, too.
Drawing on different styles, Blake also made notable album-cover art for illustrious others. For the 1981 album Face Dances by the Who, he commissioned paintings of the band by fellow British artists including Tom Phillips, Richard Hamilton, and David Hockney. For a 2004 solo album by Beach Boys mastermind Brian Wilson, he created a striking collage. That same year, he made a painting for Eric Clapton’s Me and Mr. Johnson. He also made the collage that accompanied the ubiquitous 1984 benefit single “Do They Know It’s Christmas?” by Band Aid, a supergroup comprising a huge cast of English and Irish stars. Other acts with records bearing Blake’s art include Oasis, Paul Weller, Pentagle, and Madness. 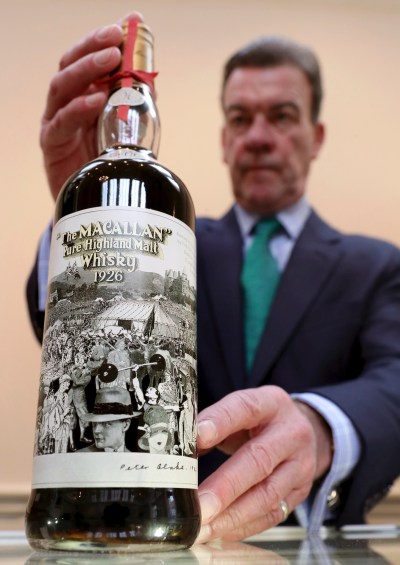 A bottle of Macallan with a label by Peter Blake for sale at Bonhams in 2019.

He designed labels for famous whiskey.
In 1986, Blake made labels for bottles of Macallan scotch whiskey that had been in a cask aging for 60 years. The release was notable enough at the time to occasion custom labels by a successful artist—but nowhere near the level of noteworthiness it reached in the past few years, when bottles started selling at auction for prices reaching $1 million and above. (The current record of $1.9 million belongs to a bottle of 1926 Macallan, but from a series with a different label than the one Blake designed.) Blake’s partnership with the storied whiskey brand continued over the years and this past spring included the launch of an “Anecdotes of Ages” collection of special bottles that date back to 1967.

In 2002, he was one of only a few painters to be knighted by the British monarchy.
At the age of 70, Blake became only the third British painter to be knighted, in a ceremony conducted by Prince Charles (because the Queen was on a state visit to Canada at the time). After the honor was bestowed, Blake said, “I’m very excited mainly because there are so few knighthoods to painters. It’s usually sculptors and architects. I’m very happy to get it on behalf of all painters. I left college in 1956 so I’ve had almost 50 years as a painter. That’s why this is so nice.”

He sent a hopeful pandemic message out into the world.
In March of last year, when the pandemic was still in an early phase of locking down much of the globe, Blake sent a resonant sentiment to his fellow Londoners and others around the world in the form of an artwork printed in the Evening Standard and meant to serve as a poster. Under a rainbow and above a heart, a few simple words sang out: “London Stands Together.” At the time, as chronicled on the website for Blake’s gallery Waddington Custot, the artist encouraged others to join him in the act of creation, saying “to make art would certainly be positive. It is time-consuming and we certainly need to fill time, it is calming and you can work with very simple tools, a pencil & paper, which everyone has.” 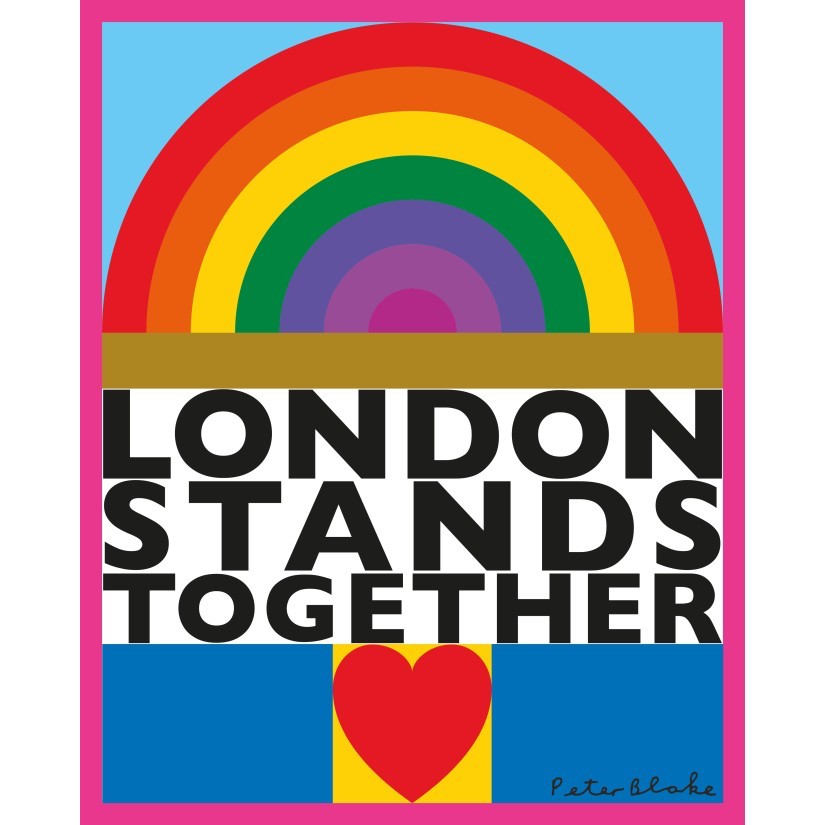