I worked on my movie Zola for almost four years. I think of it as a version of myself, and so, I’m looking forward to its release because I would like to move on to the next chapter of my life and work. It was supposed to be released last year, but was delayed due to the pandemic. I’ve gone through my own period of mourning with it over the last 11 months. But I’m ready to move forward with what’s ahead.

The television series Law and Order has so much life in it. Much like rooting fora favorite sports team, I’m particularly jazzed about Sam Waterston, who plays a District Attorney in seasons five through twenty. I discovered the program a few years ago—a very late find—while I was staying at a hotel. I kept it on in the background, and before I knew it, I was seven hours into a marathon. The show is a very formulaic procedural that is half law enforcement, half legal thriller. Each episode starts with the discovery of a crime and ends in a courtroom. I turn it on late at night, as if I’m having a bedtime story read to me before going to sleep. My experience in the pandemic has been extremely insular, and this show feels very stabilizing. While the world is crumbling around us, Law and Order is not.

I don’t often listen to podcasts, but I consistently tune in to Talk Easy, hosted by Sam Fragoso, for its hearty, curious conversation. I recently listened to an interview with writer George Saunders that really moved me. I had never heard anyone so comfortably admit that he had wanted fame, while recognizing that it wasn’t the healthiest goal. There is shame in wanting that kind of success, but also in believing that it’s what success actually means. Saunders also discusses his children and how having a family made him a better person—a type of conversation that is not often emphasized with men in the same way that it is with women. His immense vulnerability and honesty had me crying by the end. 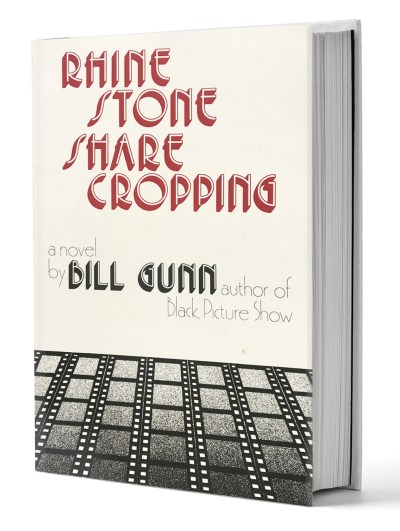 A few years ago, a friend sent me the [1981] novel Rhinestone Sharecropping by Bill Gunn. The book is about a Black director navigating an opportunity to write a script for a Hollywood studio. I love work about the artistic process, but what struck me the most was that it was the first time I had ever seen a version of myself written about, and it really encapsulates how I have had to pilot those spaces. I saved the last thirty or so pages for a full year because I didn’t want the book to end.

Live Auctioneers is a hub where auction houses and galleries can post items for bid. Having not even been in a grocery store since March 2020, I really miss shopping at markets and pharmacies. I find walking down the harshly lit, organized aisles oddly soothing—even if I don’t want anything—and I increasingly browse liveauctioneers.com as a kind of replacement. In particular, I’m really into the dark side of Americana, such as mammy dolls and Negro paraphernalia. I recognize that they’re part of a very unkind history, but I’m drawn to them. By bringing them into the safe and welcoming environment of my home, I offer them a new kind of resonance.

I just started watching the second season of RuPaul’s Drag Race UK. It’s so theatrical and campy, and the individuals really remind me of the different types of people I encountered in theater school—from the person who wasn’t previously loved to the person who is from a small town to the person who isn’t going to pursue this as a career. In that sense, the characters feel like home. This competition show really transports me to another time in my life, when I was trying to figure out who I was and how I could exist in this new creative community. The series holds space for a lot of lovely, funny, and heartbreaking moments, but is presented with a very bright patina.

—As told to Francesca Aton