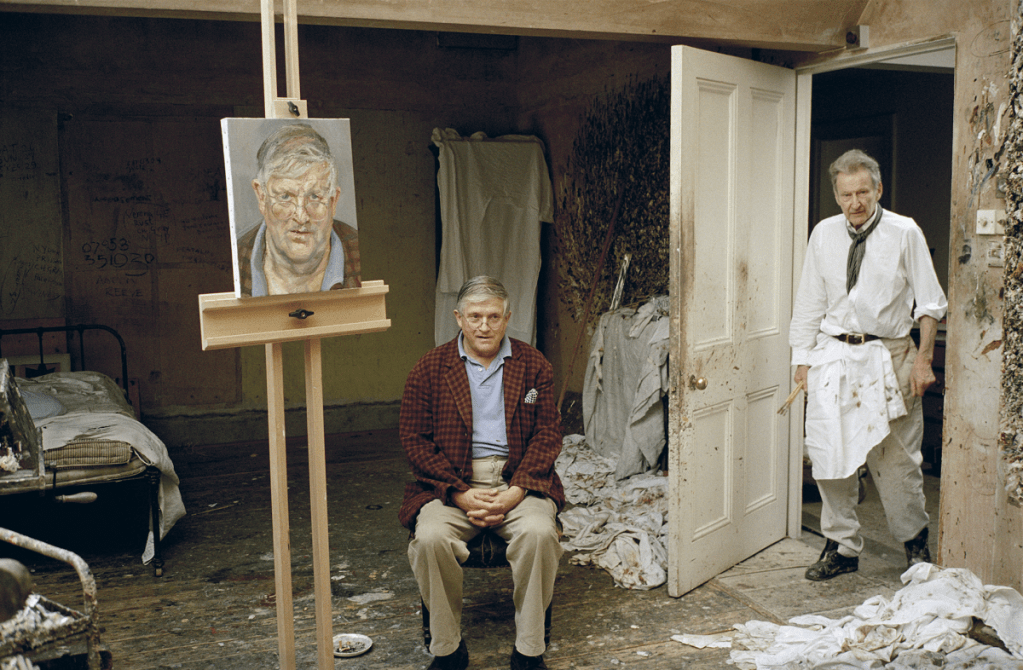 A portrait of David Hockney by Lucian Freud will be featured in Sotheby’s upcoming modern British art evening sale in London, where it is expected to fetch £8 million–£12 million ($11 million–$17 million). It will be among the top lots offered in the sale, which is scheduled to take place on June 29 at the auction house’s New Bond Street location.

The portrait, painted in 2002, was exhibited in the Freud’s 2012 retrospective at the National Portrait Gallery in London. At the time it was painted, Freud was 80 years old, and Hockney was 65. It depicts a close-up of Hockney’s face; the artist appears to be mid-thought while looking out toward the viewer.

“It is hard to think of two greater British artists who are as both critically and commercially acclaimed than Lucian Freud and David Hockney,” said Tom Eddison, Sotheby’s director of contemporary art in London, calling the work “a tour-de-force of portraiture.” This will be the first time the painting has come to auction.

The two artists first met in 1962, when Freud was already well-established and Hockney was still a student. For the painting, Hockey sat for over a hundred hours over the course of four months in the run-up to Freud’s showcase at the Tate Britain. “All the hours I sat were layered into it; he had always added, rarely taken anything away,” Hockney said of the completed work in a tribute to Freud in 2011, the year the artist died.

The months-long sitting was documented by Freud’s longtime assistant, David Dawson. Hockney would go on to use both Freud and Dawson as subjects in his own work. In the same summer, working from sketches and his memory, Hockney painted a double portrait of the senior British artist sitting alongside his assistant on four sheets of paper.

The work was first sold by Freud’s dealer Acquavella Galleries to a collector in New York for a reported asking price of £3 million. It changed hands only one more time after that, selling privately to the current owner in 2015.

Paintings by Freud are not traded often at auction, and when they do head to sale, they typically attract large sums. But the Hockney portrait is estimated still well below the current auction high for the artist, which was set in May 2015 Benefits Supervisor Resting (1994) sold at Christie’s for $56 million.