Nigerian superstar, Wizkid was the winner of the Best African Act category at the 4Syte Music Video Awards, a Ghanaian awards show.

The 2021 4Syte Music Video Awards was held in Accra, Ghana on Friday, the 28th of May 2021. Wizkid was announced as the winner of the Best African Act in a category that also had as nominees; Burna Boy, Davido, Master KG (South Africa), Diamond Platumz (Tanzania) and Innoss’B (Congo DRC). Twitter account @teamwizkidfc shared this information on Monday, the 31st of May in a tweet; 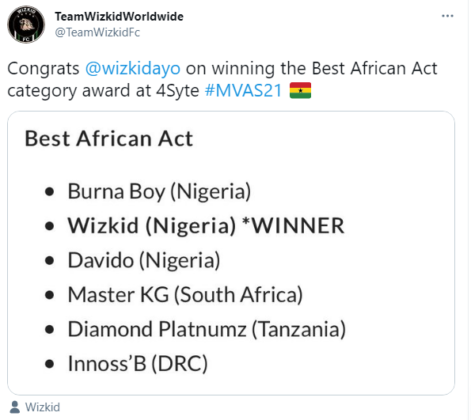 Joining Wizkid as winners on the night at the 4Stye Music Video Awards; Kuami Eugene got three awards for his “Open Gate” video while Stonebwoy‘s “Everlasting”  video got two awards including the Best Overall Video. Yaw Tog won the award for Best Discovery while Medikal won the Most Influential Artist award.

“On The Street” by Kweku Smoke