When it took place in the early hours of March 18, 1990, as celebrations for St. Patrick’s Day were still going strong, the theft of 13 artworks, including a major painting each by Rembrandt and Vermeer, from Boston’s Isabella Stewart Gardner Museum became international news. Almost immediately, it was labeled the largest art heist the world had ever seen. Now, 31 years later, with the missing artworks valued together at $500 million, it still retains that title. In the intervening years, numerous theories about an extremely complex case have been floated as to who could have taken the paintings, why they might have done so, and, most importantly, where, exactly, these invaluable masterpieces are.

The theft and the search for the 13 stolen works that followed are now getting the Netflix true crime docuseries treatment with This Is a Robbery: The World’s Biggest Art Heist, directed by Colin Barnicle. Though This Is a Robbery offers few new insights into a case that has been dissected ad nauseam by authorities, reporters, and everyday people, it seems to function mainly as a vehicle to bring renewed international attention to the lost works, with the hope of their recovery. (This has been a common style for other Netflix-produced series, most notably the relaunched Unsolved Mysteries.)

This Is a Robbery is a handsome, well-produced, and concise documentary series that takes viewers through how the heist panned out. We get a brief history of who Isabella Stewart Gardner was, how she came to build a Renaissance Venetian palace in a swamp, and why she left her world-class collection there in the form of a museum. Throughout, Barnicle pans over high-resolution images of the stolen art, offering the best glimpse of the works that anyone who didn’t go the Gardner before the theft could ever hope to get. He also eschews any celebrity interviews, instead opting for experts with deep connections to the heist, from former security staff and museum leadership to reporters, federal investigators, prosecutors, defense attorneys of suspects, and even a noted art thief and the former press secretary of the IRA.

The series opens with a reenactment of the night in question. Two young people walk by a parked car with two men dressed in police uniforms. All of this takes place around 12:45 a.m. on Palace Road, the street directly behind the Gardner museum and where the museum’s employee entrance is. With all the revelry going on and the St. Patrick’s Day Parade the following day, “it was a good time to commit a crime,” as one interviewee says in the series’ first minutes.

A production still of This Is a Robbery: The World’s Biggest Art Heist, of a reenactment showing the thieves entering the museum.

About 45 minutes later those two men would enter the Isabella Stewart Gardner Museum, get the two guards to move away from the panic button, tie them up in the basement, and then go about taking 12 works from the second floor, including Rembrandt’s only seascape The Storm on the Sea of Galilee (1633), Rembrandt’s A Lady and Gentleman in Black (1633), and Vermeer’s The Concert (ca. 1658–60), as well as one work from the first floor, Manet’s Chez Tortoni (1878–80). Many of the paintings were brutally cut from their frames. There were other more valuable works in the museum that weren’t taken, and two taken items, a finial and a Chinese bronze vase, have always stood out as oddities.

[The Isabella Stewart Gardner Museum theft is among the great art heists ever.]

Over the course of the series’ four hour-long episodes, Barnicle takes an in-depth look into the theft, paying close attention to the movements of the two thieves over the course of the 81 minutes—an unusually long time for a successful art heist—that they spent in the museum, as documented by the museum’s motion detectors that were sent to a dot matrix printer. (The night’s VHS tapes were taken.) The animations that show their ping-ponging movements are especially notable for how they visualize the robbery and hint at the thieves’ seemingly erratic behavior. Steve Keller, a security consultant who advised the Gardner before and after the theft, helps with this, and is shown new evidence that is perhaps one of the series’ few major revelations. 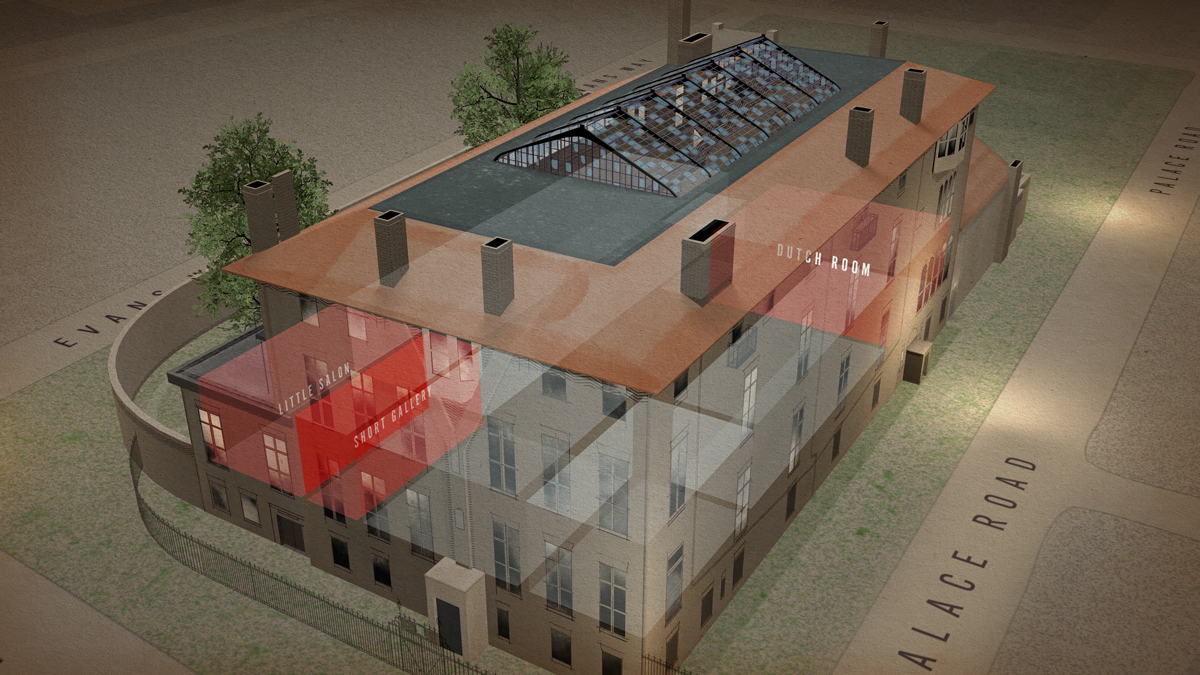 A production still of This Is a Robbery: The World’s Biggest Art Heist, showing a diagram of the Isabella Stewart Gardner Museum.

In the first episode, we hear from the two young people who saw the two thieves in a parked road that night, most likely the only eyewitnesses to the crime other than the guards. We later learn that, though they were interviewed by the Boston Police Department, the FBI never followed up with them. Their accounts were not used in the development of the widely circulated composite portraits of the two thieves. “I probably wouldn’t have remembered this night if it hadn’t been for what happened later,” Nancy Clougherty, one of two eyewitnesses, says.

That’s a running motif in This Is a Robbery, though it’s never explicitly stated: it’s made to seem like the Boston office of the FBI was partly responsible for bungling the investigation into theft. The Gardner theft doesn’t appear to have been a priority for the Bureau in 1990, whose agents were seemingly more concerned with taking down organized crime in attention-grabbing ways. (Major indictments against mobsters came a few months after the theft.)

It’s almost universally accepted now that no one would steal the works in an effort to sell them, either legitimately or on the black market. One of the main theories behind why the works might have been stolen is that the Italian mob—or any other career criminals—would have wanted to use it as a bargaining tool to lessen their prison sentences—a “get out of jail free card,” as one interviewee says. That had been done before in the Boston area, when Myles Connor Jr.—a continual person of interest in the Gardner cause, who could not have been one of the two thieves because he was in federal prison on the night of the robbery—stole a Rembrandt from the MFA Boston in broad daylight in the 1970s. (That theft was to lessen his sentence in connection with another heist of paintings by Wyeth father and son.)

The Gardner’s lax security was well-known by most criminals in town. Many, it seems, had cased it before, including Connor, and the FBI had even warned the museum about ten years earlier that they had made arrests in connection with people who were planning a heist. Even former Gardner guards admit that a museum with so many highly valued works should have had better security. This was news to Anne Hawley, the director at the time, who was not made aware of the FBI’s earlier arrest when she took the job a few months earlier. Her first major improvement to the museum was installing a much-needed HVAC system instead of bolstering its security. 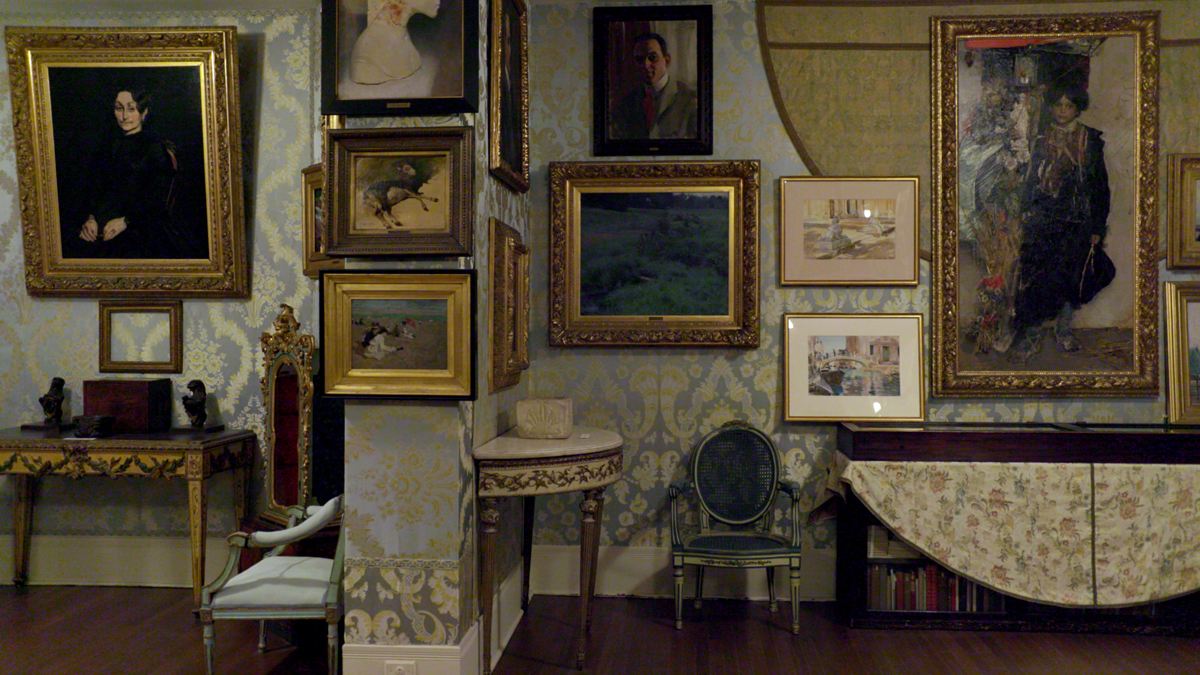 A production still of This Is a Robbery: The World’s Biggest Art Heist, showing the Isabella Stewart Gardner Museum’s Blue Room.

Others float the theory that the heist was an inside job. According to some interviewed, it had to have been—the thieves knew too much about the museum’s layout and its security system, including where the only panic button was. Rick Abath, one of the two guards on duty that night, has been accused of being involved. That night, he opened the secured door 20 minutes before the thieves entered—a signal, some believe. He was also the only person to set off the motion detectors surrounding the Blue Room, where the Manet painting was held. (The thieves never set off those motion detectors while inside the museum.) Abath has denied his involvement on numerous occasions, and others say his actions that night are just unlucky coincidences.

This Is a Robbery tackles material that has already been taken up numerous times by reporters, including most recently in the 2018 podcast Last Seen, a production by the Globe and Boston’s NPR-affiliate WBUR, in which reporters Kelly Horan and Jack Rodolico went fully down the rabbit hole and came up with no answers. (Barnicle notably omits one theory from Last Seen that was believed to be the “best lead the FBI ever had in the Gardner case”; the suspects involved in that lead were later arrested for stealing Picasso paintings from the Paris apartment of the artist’s granddaughter.)

That this Netflix documentary takes the case up anew is proof that the Isabella Stewart Gardner heist continues to remain intriguing far beyond the art world—perhaps because no one has gotten any closer to solving its mystery.

In 2013, the Boston office of the FBI held a press conference, announcing what they said at the time would be the “final chapter” in the investigation into the theft of the Isabella Stewart Gardner Museum. They said they knew with a high degree of certainty who had entered the museum and stolen the works and that they could trace the movement of some works across the Northeast. 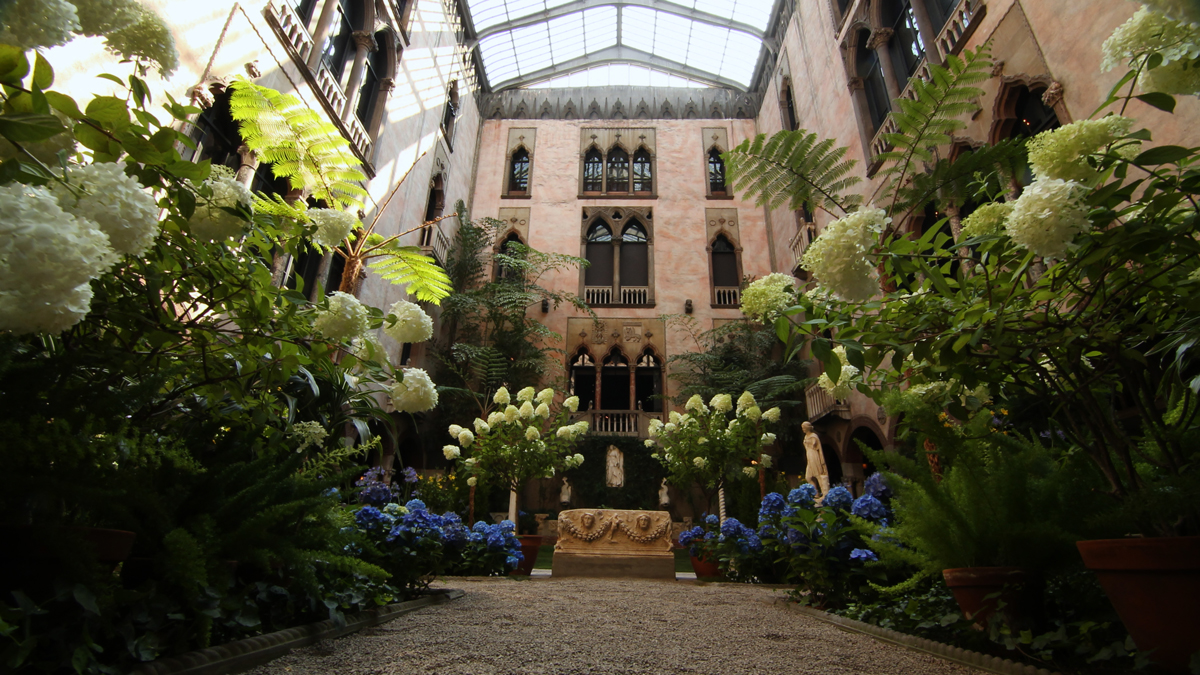 A production still of This Is a Robbery: The World’s Biggest Art Heist, showing the Isabella Stewart Gardner Museum’s interior courtyard.

There hasn’t been an update from the FBI since then, and the paintings still haven’t been recovered. The FBI also didn’t release the names of those it has determined to have commited the crime, citing an ongoing investigation. (Many of those believed to be involved are now dead.) Barnicle goes to great lengths to map who those suspects may have been, and even proposes that one person involved in the heist may have killed off everyone else who took part or had knowledge of it.

There’s no closure in the Gardner case, though the museum is expectantly waiting for the artworks’ return—empty frames hanging on its walls will be filled if they are recovered—and the public is, too. The only thing left to do, Barnicle’s documentary suggests, is to stand by for the latest updates from investigators. As the series’ final moments make clear, the real pain of the heist is not so much that paintings were stolen, but that we might have been robbed from ever seeing them again.