In March, at the start of what would become a global lockdown, Los Angeles–based artist Patty Chang emailed a Google survey to residents in the city, soliciting lists of their personal fears.

“Personal, global, societal, mundane, or profound,” the survey read. “Everything is valid. Just write down quickly any thoughts that come to your head.” The dozens of responses that Chang received went into the latest iteration of Milk Debt, an ongoing video project based on collective fear—and by extension, fear’s frequent companions of dread, despair, and uncertainty.

In May, with a scheduled solo exhibition postponed by the pandemic, Chang and the 18th Street Arts Center in Santa Monica, California, streamed a preview of the new piece online. The 10-minute clip featured a Zoom call with an unidentified blonde performer who, opening her palm-leaf printed robe, attaches a mechanical milk pump to each of her bare breasts.

As the pump’s swift, rhythmic contractions mimic the sound of panicked wheezing, she reads Chang’s scripted collection of Angelenos’ fears, the words scrolling on the bottom of the screen: “Volcanoes. Bloody Mary. My cat scratching me and the cut getting infected,” she reads.

The pumping slows, and trivial concerns escalate to the existential. “They will not build the tools to overcome dark times,” she continues. “There is no end in sight.”

Milk Debt headlines Chang’s rescheduled solo exhibition of the same name, which opened this week at the 18th Street Arts Center. The full version of the piece appears as a multichannel installation of nine different women from different parts of the world, reciting fears gathered from their local communities as milk is suctioned from their breasts.

“I wanted to think about the affective states of people who occupy a particular geographic place,” said Chang, who began collecting fears for Milk Debt in Hong Kong in 2019, at the very start of the city’s tumultuous extradition protests. In that first iteration, she shot a young woman pumping breast milk on an overpass, reading mounting sentiments of civic upheaval as demonstrators streamed down the road below. The project has continued in Los Angeles and along the U.S.-Mexico border in Texas, with more recent additions filmed via Zoom to observe social distancing.

Alongside location-specific concerns, the Milk Debt performers speak of recurring universal fears—economic precarity, the threat of illness, and myriad other forms of violence. Their pumping of milk—a nurturing act that can signify the often invisible labor of women—also stands in as a symbol of humans’ pillaging of the planet, with the project having been initially inspired by Chang’s own consuming anxieties over climate change.

Milk Debt’s “fluids come to stand in for the extraction of water, oil, and other resources that the Earth provides,” said Anuradha Vikram, the show’s curator, noting that some performers were filmed near the Los Angeles River and Los Angeles Aqueduct. The work’s title comes from the Chinese Buddhist concept of an insurmountable debt owed to one’s mother for having nursed at her breast, and, amid the ongoing rising temperatures and inextinguishable fires throughout California, the artist was reminded of the enormous debt we continue to incur with the planet.

“Themes of drought and wildfire kept recurring during the making of the work, which alongside political unrest has kept the different geographies of the project connected to one another in haunting and beautiful ways,” Vikram added. “I feel that Milk Debt is a very urgent body of work that will connect with people on a gut level.” 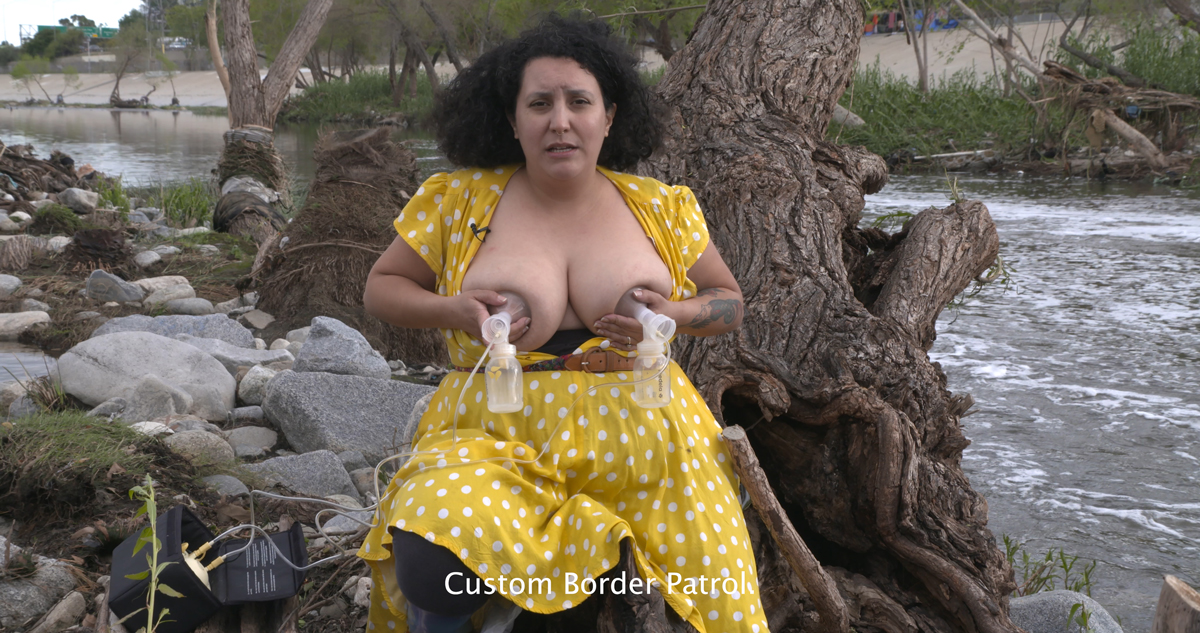 While a show fixated on the topic of fear seems expertly tailored to our era of multivalent, impending doom, Chang’s interdisciplinary practice of performance, video, photography, and sculpture has exhumed the private, vulnerable depths of the human experience for decades.

“Her practice has always struck me as fearless” in its insistence on confronting and verbalizing the worst of our emotions, said Nancy Lim, a curator at the San Francisco Museum of Modern Art who organized another survey of Chang’s work: “Que Sera Sera,” a two-venue exhibition on view now at San Francisco’s Friends Indeed and Cushion Works galleries through November 6. Themes of loss and grief weigh heavily in the featured works that Chang made from 2001 to 2017, including videos and photographs that allude to the declining years and ultimate passing of her elderly father.

The 2013 two-channel video that lends that survey its name, Invocations and Que Sera Sera, invites viewers into the actual hospital room where her father lay dying. As Chang bounces and sings to her infant son next to the hospital bed, in split screen, her mother reads a list from an iPad invoking the emotional turmoil of his final days: “Invocation of a fracture. Invocation of humiliation. […] Invocation of inappropriate laughing or crying.” 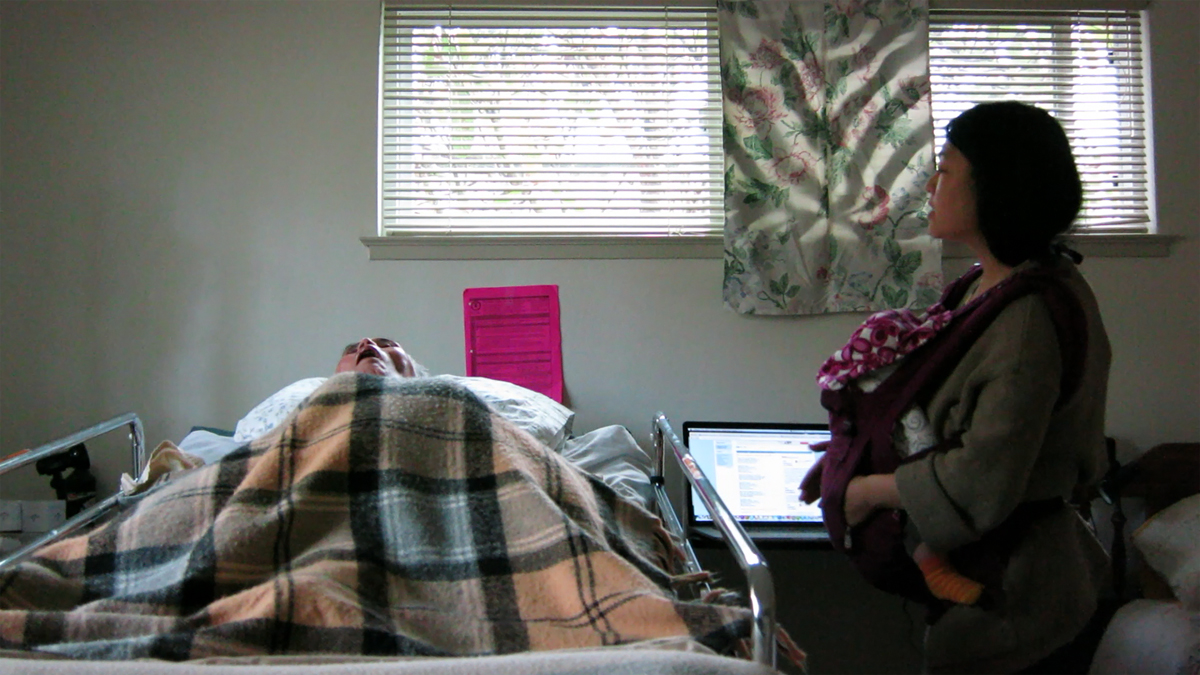 Chang is Chinese-American, born and raised in the Bay Area. After graduating from the University of California, San Diego in 1994, she began her career when she moved to New York and engaged in its alternative art scene. Defying the purported ideals of the female body, including the supposed submissiveness of the Asian female body, her early works incorporated private bodily functions and wincing simulations of self-harm that recall the contentious “blood-and-guts” work of 1970s feminists. In the 1996 performance, Gong Li With the Wind, she gorged on beans until she defecated. And in the 1998 video Shaved (At Loss), she shaves her pubic hair while blindfolded, periodically rinsing her razor in a glass of Perrier.

In the 1998 video Melons (At Loss), Chang recalls an aunt lost to breast cancer while slicing a dull knife through the tip of her bra, exposing a cantaloupe in lieu of a breast. As she masochistically squishes and eats it with her fingers, her actions overshadow the true sentiments of the piece. Over the years, however, the artist has continually refined a sense of balance, easing the transgressive barriers that had previously shielded that deeper sentimentality from view.

“The works of the past 15 to 20 years chart an emotional expanse,” Lim said. Rather than elicit the temporary, piercing shocks of Chang’s earlier pieces, her later works like Invocations have the power to blanket viewers under the crushing weight of grief. 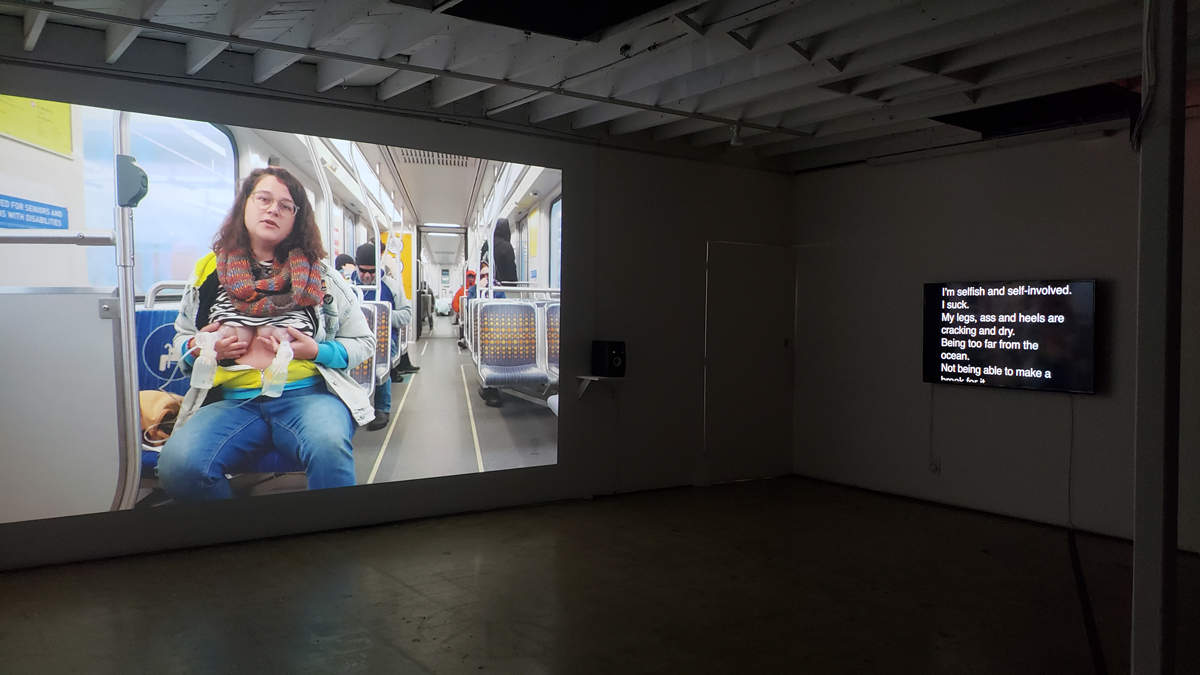 “Que Sera Sera” surveys the shift in Chang’s practice towards grander, more poetic narratives by revisiting works from “The Wandering Lake,” the artist’s 2017 Queens Museum solo exhibition.  This includes the “Letdown” series, which highlights the surreal affinities between the human body and various bodies of water, that Chang photographed along Uzbekistan’s shrinking Aral Sea in 2014, shortly after the birth of her son. Prohibited from taking pictures of the Soviet-era irrigation sites sucking the area dry, she shot her own “sympathetic loss of flow”—her own breast milk emptied into random saucers, tea cups, and fish tins at the end of every meal.

“There’s something superhuman about the body producing this fluid,” Chang said, circling back to Milk Debt. Lactation itself is its own affective state, she explains, as it releases oxytocin, a kind of anti-fear chemical that sends nurturing waves of euphoria and empathy through the body. In Milk Debt, in their chemically-induced nurturing state, “The performers in some ways channel these lists,” she said. “They read [these fears], absorb them, and spit them out, channeling those individual, personal states of being into public speech, a collective language of understanding.”

Below the surface layers of ugly feelings and absurdist gestures, collective understanding is the recurring sentiment that runs through Chang’s expansive body of work. Performance functions as emotional release for both artist and viewer, a defanging of universal anxieties as they’re spoken aloud. In her performative metaphors that highlight the far-reaching, unlikely connections we share with each other and with the Earth, she reminds us that no one undergoes these anxieties alone.

Sun Oct 25 , 2020
Nigerian Disc Jockey and one of the heroes of the Lekki Tollgate Massacre that took the lives of many,  DJ Switch has finally dropped her first official statement since the Lekki Tollgate massacre which happened on the 20th of October and according to her, the incident was more than what […]