Until 2020, the Works Progress Administration, a Great Depression–era government program that gave billions of dollars to artists during the 1930s, was largely the stuff of high-school U.S. history courses. But it didn’t take long for it to become the source of fascination within the art world once the pandemic struck the U.S. and Europe. In late March of last year, a mere two weeks after lockdown began in most places, curator Hans Ulrich Obrist called for a government relief program of the WPA’s scale. (So far, none has sprung up.) One month later, art historian Jody Patterson wrote in an ARTnews essay that the WPA’s “aim of radical inclusivity and accessibility—in which art benefits more people, rather than fewer—should not be the distant vision of a past generation.” Government funding for the arts—rarely, if ever, a sexy topic—hadn’t seemed this interesting in ages.

With all this renewed attention being paid to the WPA, it’s no wonder that Wieland Schulz-Keil’s 1976 documentary New Deal for Artists was re-released digitally last week. More than simply charting how and why Franklin Delano Roosevelt’s government saved the arts during a time of crisis, the film, which first aired on West German television, considers how organizations like the WPA effectively forever altered painting, sculpture, photography, theater, and more across the United States. As this film goes to show, when artists are supported, the country as a whole is, too.

To pull the country out of economic doldrums, Roosevelt believed it to be necessary to stimulate the arts. And so, in 1935, as part of his larger New Deal program, the WPA was born with the mission of disbursing funds to artists in need. Its participants, which included playwrights, writers, visual artists, and more, got between $20 and $25 a week (about $390–$487 in today’s dollars) to produce whatever they wanted, whenever they wanted. Crucially, there were almost no constraints on what they ended up producing. “They didn’t ask whether you painted this way or that way,” artist Bernarda Bryson-Shahn says in the film. “They asked whether you needed or wanted help.”

In this way, artists who got money through the WPA were able to experiment in ways they might not have otherwise. The filmmaker and playwright Orson Welles, who narrates the film, used his money from a WPA subsidiary, the Federal Theatre Project, to produce an all-Black production of William Shakespeare’s Macbeth in New York. Some of the people who starred in it were given their first major roles—ones that were nearly impossible for Black actors to obtain prior to the WPA. In New Deal for Artists, Welles recalls that WPA artists’ creations were also “largely protected from government interference.”

Yet most participants in the program were either directly or indirectly focusing on the same subject in their work: the U.S. itself. “The American artist was finally looking at his own country for his own subject matter,” artist Aaron Bohrod explains at one point. In other words, artists no longer needed to go all the way to Paris to find an enriching art scene. Now, all they had to do was head to a major city or, better yet, journey to the Midwest.

Works such as this 1939 photo by Dorothea Lange shot for the Farm Security Administration focused on workers in the center of the U.S.

There was no question that the Midwest and Southwest had suffered the worst of the Great Depression. Industry there had been dealt a blow, and many were out of work. Poverty was everywhere, particularly after the Dust Bowl decimated the country’s agriculture. Artists sought to bring light to the struggles people in this part of the country faced, often via photography. The Farm Security Administration, an agency formed in 1937, became the prime source of this visual material. Working under the sign of photographers like Jacob Riis and Lewis Hine, artists such as Dorothea Lange, Walker Evans, and Gordon Parks turned their lenses on those who lost everything. Their gazes were empathetic—only rarely before them in U.S. history had photographers seemed to care so much about their subjects—and there was a desire to shine light on the plight of Southwesterners to a larger public. Of Evans, Welles says, “He never degraded his subjects.”

Looked at today, New Deal for Artists is most striking for its repeated emphasis on the artists of color who benefitted from WPA programs, of which there were many. Zora Neale Hurston, Jacob Lawrence, Richard Wright, Diego Rivera, and countless others produced notable pieces via its funds. In the film, the focus is largely on Native American artists who made a career because of the WPA. Among them was Harrison Begay, a Diné painter who explains that he no longer had to create with the market in mind, and was suddenly liberated to try out ambitious and more modern modes of working. “It’s the everyday life of my people,” he says, holding an image of a woman surrounded by sheep.

No good thing lasts forever, however, and by the end of the ’30s, the WPA was being attacked—on both sides. Leftists quibbled with some of the artists involved, in particular Rivera. (They considered the French he spoke too bourgeois, even though his murals are filled with workers on the job and served as inspiration to many.) Radicals also found a contradiction in taking money from the government. Here’s poet Kenneth Rexroth, explaining the paradox: “For the left, I mean, to take money from the bourgeois state? St. Paul has a phrase for this: it’s called making friends out of the mammon of inequity.” 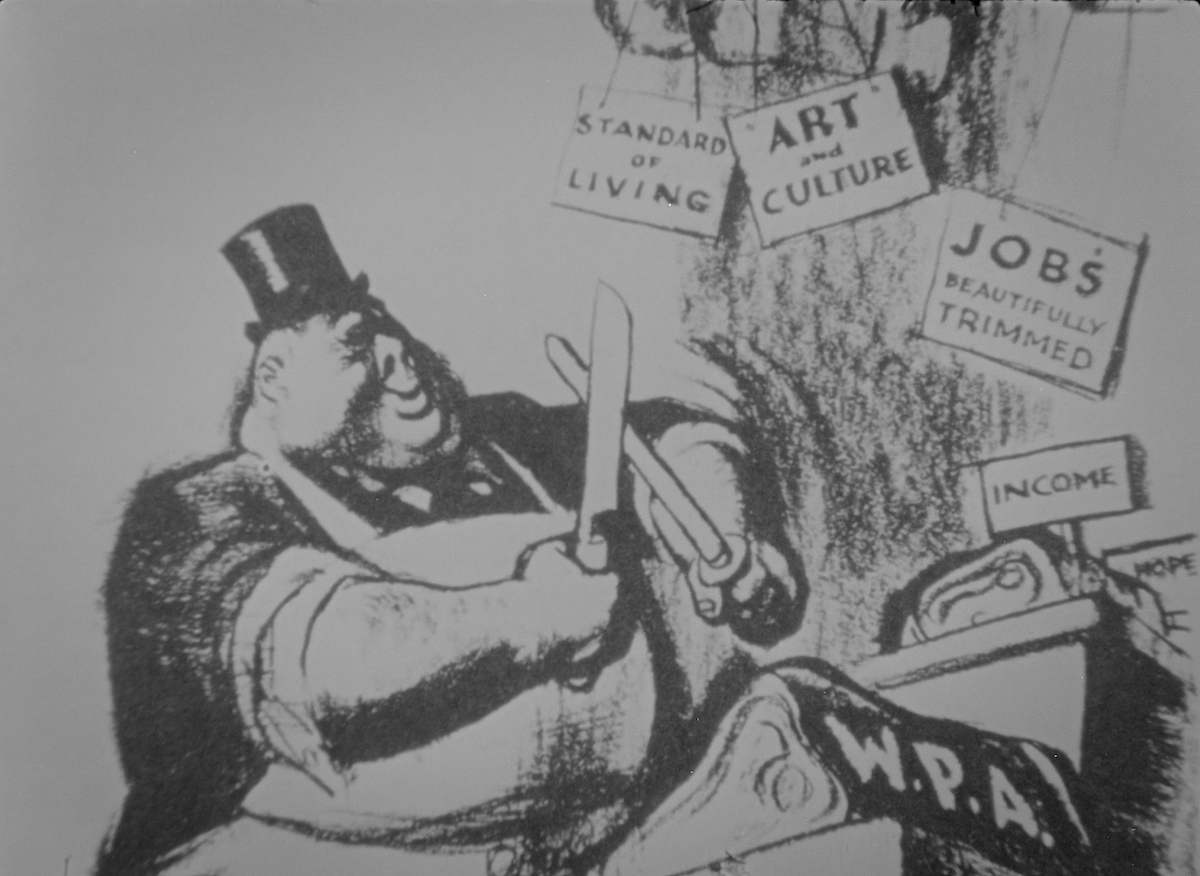 Perturbed by these perspectives, right-wing extremists also found something to complain about. They attempted to smear the WPA by labeling it Communist, and their racist speeches ensured that newspapers would print screeds about the Black-led and interracial theater productions being staged by playwrights like Joseph Losey. In the early ’40s, amid calls from conservatives for its end, the WPA wound down for good. “Neanderthalism took over,” as the cantankerous writer Studs Terkel puts it.

But, in a sense, the damage had already been done: artists like Jackson Pollock, Lee Krasner, Willem de Kooning, and Arshile Gorky had been given their first major chances through the WPA, and in the coming decade, they would go on to define the Abstract Expressionist movement. Curiously, the WPA’s role in their careers is nearly forgotten, as are the early works these now-revered artists created through the agency, in part because many have been lost. The WPA itself has also largely faded from the public consciousness. “It’s as though it never even existed,” Terkel says. “Not even in history books, but also in the minds of people.” These words offer a good reason to see New Deal for Artists and prove Terkel wrong.