In a year that left institutions around the world shuttered for months on end, public art took on a new resonance in many cities and provided safe experiences for those seeking a bit of visual relief from quarantine. Public artworks created in 2020 often took up urgent political and social issues, and the very notion of monuments—of which figures were being elevated and how they were rendered—figured in protest movements, opinion pages, and beyond. The guide below represents a survey of some of the year’s most notable projects, controversies, and events involving public art, many of which have already changed the ways we view and think about our histories and environments.

A mural of George Floyd in Minneapolis.

Murals emerged amid protests surrounding systemic racism and police brutality.
Protests following the killing of George Floyd by police in Minneapolis in May took place around the world this year, and art played a significant role in the movement that followed. Murals dedicated to Floyd were painted in public spaces in Dallas, Los Angeles, Oakland, Nairobi, Brussels, and elsewhere as demonstrations continued. One such work painted on the side of the grocery store in Minneapolis where Floyd was arrested and killed became a site for gathering and mourning. The mural by artists Xena Goldman, Cadex Herrera, and Greta McLain, as well as collaborators from the community, depicts Floyd at its center and features the names of other Black Americans killed by police in recent years. The Minneapolis mural topped ARTnews‘s list of the most important artworks of 2020. 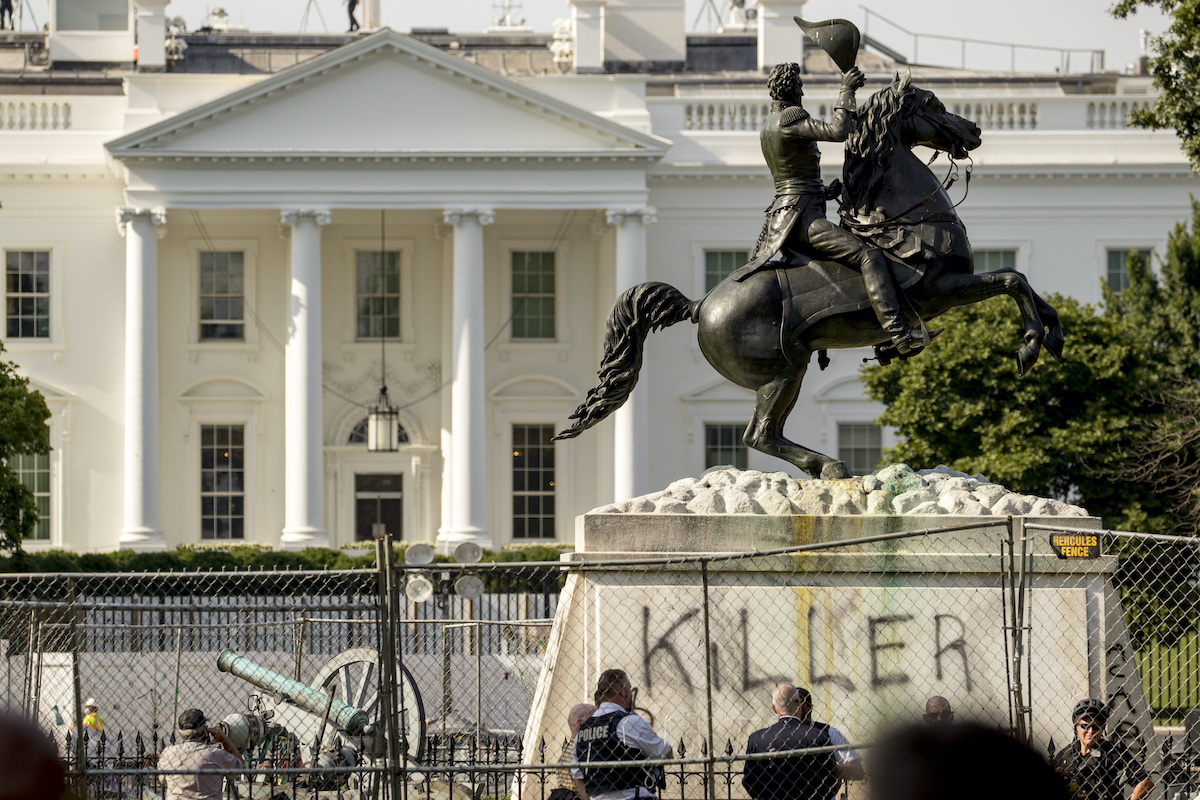 A statue of Andrew Jackson in Lafayette Park, Washington, D.C.

Amid reckonings with white supremacy and colonialism, some monuments were toppled or removed.
This year, the Black Lives Matter movement drew renewed attention to historical monuments in the United States and Europe that many consider vehicles for glorifying racist figures. Such statues have been focal points for demonstrations in Birmingham, Boston, Philadelphia, and other American cities, prompting local officials to reconsider their display in public—and oftentimes central—locations. Statues of politicians who espoused racist views, Confederate soldiers, Christopher Columbus, and others were toppled by protesters or removed by city governments throughout the year. But this kind of reimagining of public spaces was not limited to the U.S. In Antwerp, Belgium, officials removed a statue of King Leopold II from the city’s Ekeren district after it was defaced by protestors, and in Bristol, England, demonstrators toppled a monument of 17th-century slave trader Edward Colston and pushed it into the harbor. A statue by Marc Quinn that the artist had installed to replace the Colston monument was subsequently removed from view. Artist Thomas J. Price, who has appeared on ARTnews‘s Deciders list, wrote at the time, “A genuine example of allyship could have been to give the financial support and production facilities required for a young, local, Black artist to make the temporary replacement.” 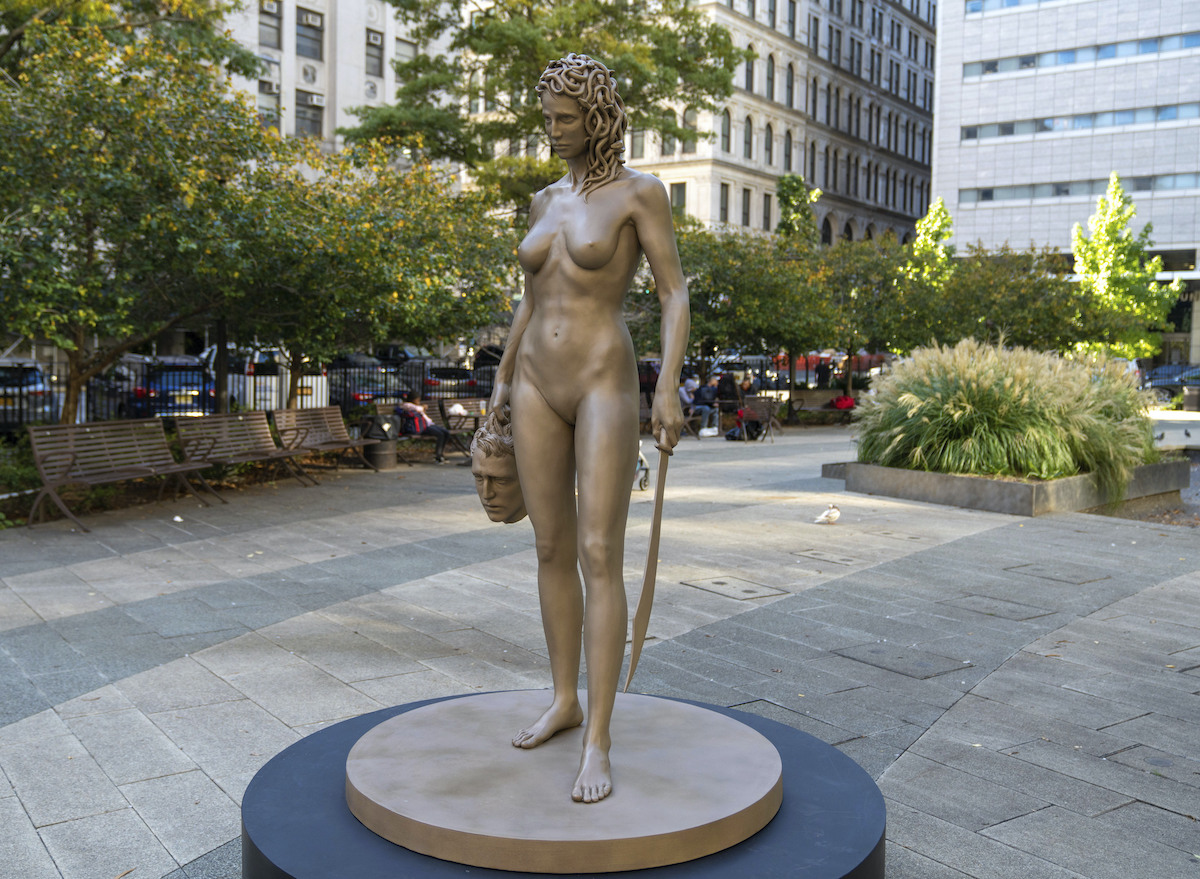 Medusa With The Head of Perseus by Luciano Garbati in Manhattan.

Controversial sculptures depicting nude women missed the mark in New York and London.
Some statues that went on public view this year made headlines for the pushback they received. One of the most hotly debated sculptures of 2020 was artist Luciano Garbati’s Medusa With the Head of Perseus (2008), which was unveiled in Manhattan in October. The work, which depicts the gorgon holding Perseus’s severed head and was intended as “a symbol of justice for many women,” according to the artist, was installed in the park facing the New York County Criminal Court, where Harvey Weinstein stood trial and was convicted of two felony sex crimes. Many wondered why a male artist should be given this kind of space and exposure to address the #MeToo movement.

In November, another nude figure cropped up in London, this one an ode to the 18th-century English writer, philosopher, and women’s rights advocate Mary Wollstonecraft. The work by artist Maggi Hambling debuted in the city’s Newington Green park,  and it is meant to represent “an everywoman” and help correct the lack of diversity in London’s monuments, over 90 percent of which are dedicated to men. Some took issue with the fact that one of the city’s only public odes to a woman foregrounds nudity, a choice that seems at odds with statues of men from history. Writer Malorie Blackman said on Twitter at the time, “I’ve seen many statues of male writers, rights activists and philosophers and I can’t remember any of them being bare-assed.”

[Read about how public art commissions have become political battlegrounds in American cities.] 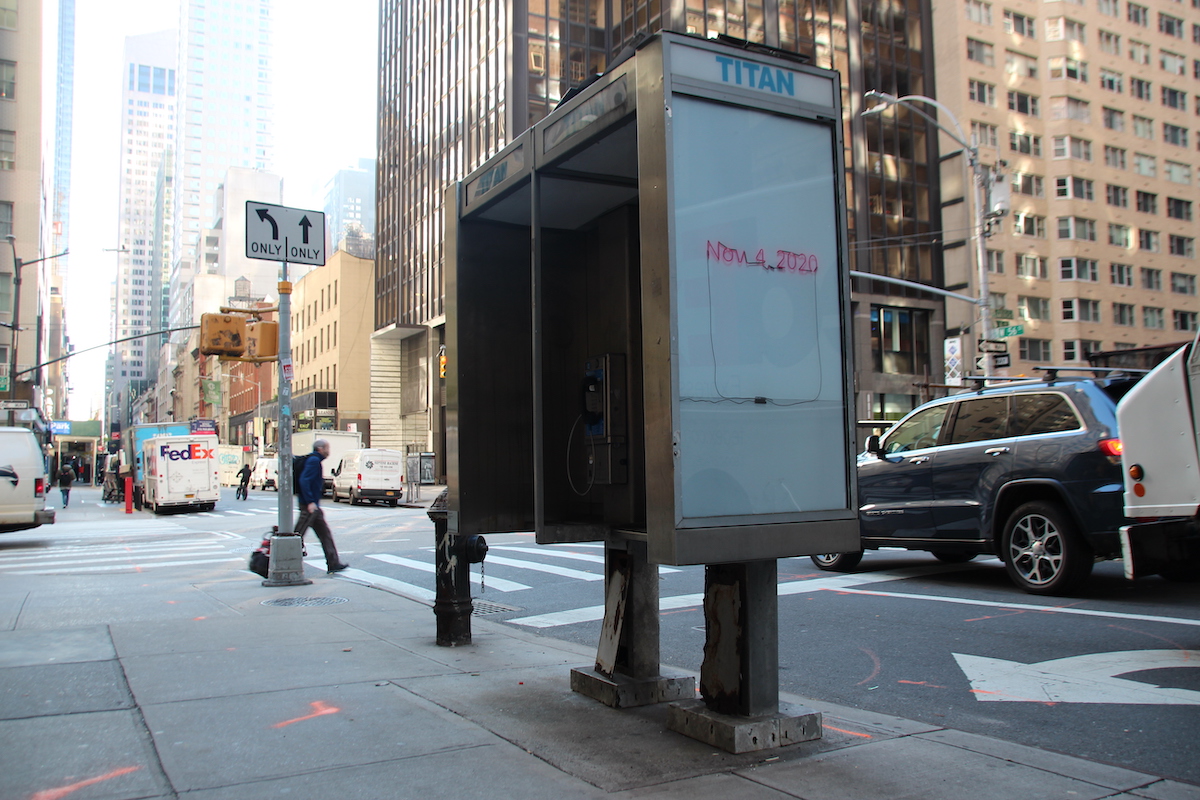 A phone booth in New York featuring Glenn Ligon’s Aftermath, which figured in the exhibition “TITAN.”

Public artworks in New York took up the pandemic, the Black Lives Matter movement, the 2020 U.S. presidential election, and more.
With museums facing months-long closures due to the health crisis, outdoor projects proliferated in unexpected spaces on the streets of New York. Among them were the Public Art Fund’s sprawling, city-wide presentation “Art on the Grid” that showcased works by 50 local artists in 500 bus shelters and on the screens of 1,700 LinkNYC kiosks. Some works in that show, which opened in the summer, responded to the killing of George Floyd. Chase Hall described his work in the exhibition, titled A Great Day in Harlem, as a “personal expression to an incalculable feeling and insurmountable loss.”

Mierle Laderman Ukeles, whose practice has long centered the daily maintenance of New York and the workers that conduct essential work, debuted a new piece titled For  ——>  forever…. in various locations across the city in September. Appearing in subway stations, on screens in Times Square, and on the façade of the Queens Museum, the work features a message written in the artist’s handwriting: “Dear Service Worker, Thank you for keeping NYC alive!’ for ——> forever….” The work references Ukeles’s Touch Sanitation Performance from the 1979, offering an enduring and resonant expression of gratitude to the people who kept the city running amid the pandemic.

[Read an abridged history of public art in New York from the 1960s to present.] 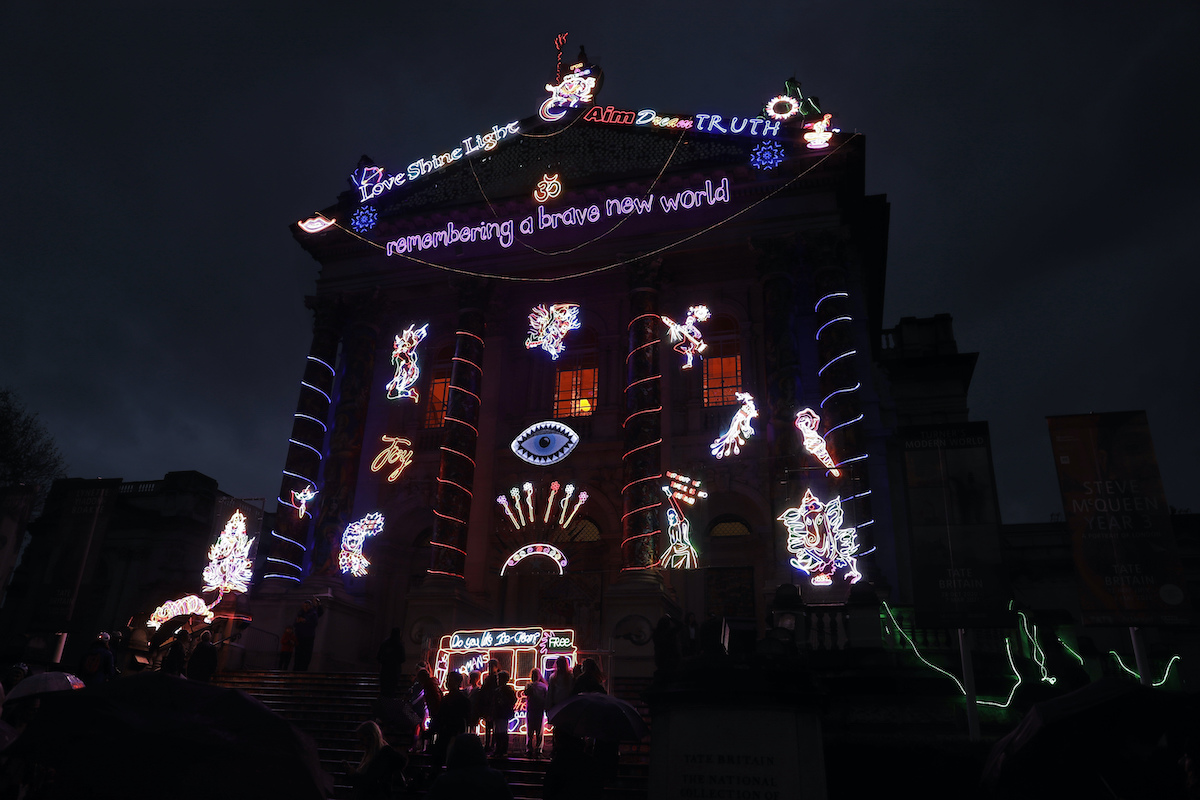 Museums presented standout works outside their walls.
Museums have been deeply impacted by long-term closures, reduced capacities, diminished ticket sales, and other attendant effects of lockdowns and social distancing measures. With indoor art viewing significantly curtailed, a number of institutions brought art to audiences beyond their galleries. As part of Nari Ward’s retrospective “We the People” at the Museum of Contemporary Art Denver, the artist presented public works in the city, including a multi-story projection on the iconic clocktower and images of the artist’s wall-drawings on digital billboards and kiosks. Organized by the MCA Denver, Orange Barrel Media, and curator Diana Nawi, the centerpiece of the public exhibition—a projection titled LAZARUS Beacon—was a meditation on the histories of immigration and xenophobia in America inspired by poet and activist Emma Lazarus’s 1883 sonnet “The New Colossus,” a text that is inscribed on a plaque at the Statue of Liberty.

Some institutions utilized their facades in new ways. The Metropolitan Museum of Art in New York displayed two banners by Yoko Ono, titled DREAM TOGETHER, on its exterior to convey “an urgent, poetic message of unity, positivity, and aspiration,” Max Hollein said in a statement at the time of their unveiling in August. And the Phillips Collection in Washington, D.C. took a similar approach with its exhibition of Jenny Holzer’s text-based installation Moral Injury / So Vote in September.

In London, Tate’s fourth winter commission, through which artists install intricate artworks across the museum’s facade, brought a dose of much-needed vibrancy and light to the city. This year, Chila Kumari Singh Burman created a colorful installation of illuminated images and phrases titled remembering a brave new world. The work confronts Britain’s colonial history and features, among other elements, a reference to Lakshmibai, the Rani of Jhansi, who fought against British imperialism in India during the 19th-century.

An AR rendering of “NO MORE CAMPS” over Santa Anita Assembly Center in California by curator and writer Karen Ishizuka / Tsuru For Solidarity.

At the Biennale of Sydney in Australia, Nicholas Galanin took up the history of violence against the country’s Aboriginal peoples with Shadow on the Land, an excavation and bush burial, which figured in ARTnews‘s list of important artworks this year. A timely ode to ongoing debates about statues of historical figures, the work depicts the dug up outline of a monument to 18th-century British Royal Navy captain James Cook.

Augmented reality artist Nancy Baker Cahill, meanwhile, made her newest animation, titled Liberty Bell, available for viewing in locations across the United States. The digital work, which can be experienced through smart devices, features a swaying, abstracted bell accompanied by increasingly cacophonous ringing sounds. Debuting in a U.S. presidential election year, the work considers how notions of freedom and access have impacted America’s past and present. The artist, who was included on ARTnews‘s most recent Deciders list, said that the project’s sprawling nature was timed auspiciously, if inadvertently, for the pandemic. “In a moment of social distancing, it can be experienced by most people if they have access to a phone or aren’t putting themselves at risk by being outside,” she told ARTnews this year.

Tue Dec 29 , 2020
Management of Twist club in Ghana, Crescendo, have made a statement speaking on their role in the reports of the Davido and Burna Boy altercation that has been in circulation since the early hours of 28th December.  ALSO READ: I Go Leave This Music For Una- Davido Reacts Following Alleged […]