In 1997, Christie’s put 58 works, including ones by Jasper Johns, Robert Rauschenberg, Frank Stella, and Eva Hesse, up for sale. All eyes were on a prized group of Picassos, however. At the time, the Spanish artist’s market was on the rise, but no one was sure just how well this cache of art would do—Impressionist art was still the top earner at auction, and Picasso’s market ascent had only recently been cemented.

The Christie’s sale, which drew an astounding 2,000 people to salesroom, ended up exceeding expectations, netting a then-staggering $206.5 million, against an estimate of $125 million. The result was a game changer, setting a record for a single-owner auction. The owners in question were the late New York couple Victor and Sally Ganz, who, having amassed the most significant private holdings of Picassos in the U.S. during their lifetime, gained a reputation as two of the most forward-thinking art patrons of their generation. The collection was sold by their four children, who could no longer afford to hold on to the art that once lined the walls of their parents’ Manhattan home.

Few collectors had the art historical knowledge to amass such a collection, and even fewer could seriously engage with the works in it. The Ganzes were those rare collectors—patrons with art historical savvy and an acute sense for aesthetics. “They were really serious collectors—obsessive, in a way,” Adam Weinberg, director of New York’s Whitney Museum, where Victor was a longtime trustee, told ARTnews. “They knew everything about the artists they focused on.”

Pablo Picasso’s The Dream, 1932, for sale at Christie’s during the November 1997 auction of the Ganz collection.

Up until their deaths (Victor in 1987 and Sally in 1997), the Ganzes focused on works by just a handful of artists. That collecting style was unusual. Many of their collecting peers preferred to buy art by a wide range of artists, but the couple chose to focus on a select few so as to collect them in depth.

At the center of the Ganz collection were the Picassos, and alongside them were works by postwar pioneers Robert Rauschenberg, Jasper Johns, Frank Stella, and Eva Hesse. At various points, the collection also included works by Mel Bochner, Claes Oldenburg, Tom Levine and Robert Smithson, Richard Tuttle, and Robert Morris.

“They were legends in New York because they owned all these Picassos,” said Christie’s chairman emeritus Stephen Lash, who first met the Ganzes through New York social circles, well before the collection came to be auctioned at Christie’s. Lash remembers Sally fondly for her wit, her no-nonsense attitude, and her chain-smoking habit. (“She was the only person in the world I ever bought cigarettes for,” he added wryly.)

But, in comparison to other New York legends, the Ganzes had a relatively modest fortune. The two accrued their wealth through D. Lisner & Company, a costume jewelry business, where Victor served as president, a role he inherited from his father. Still, they made sure that their holdings were always on full display. In their Manhattan apartment, they mounted their Picassos in elegant hangs that made their home a destination. Weinberg recalled dinners there attended by art world literati, and figures like curator and art historian Robert Storr passing through to view the collection. “We would spend hours talking about art,” Weinberg said. Of Sally, Weinberg, too, recalls a serious inquirer. “She would ask really tough questions.” 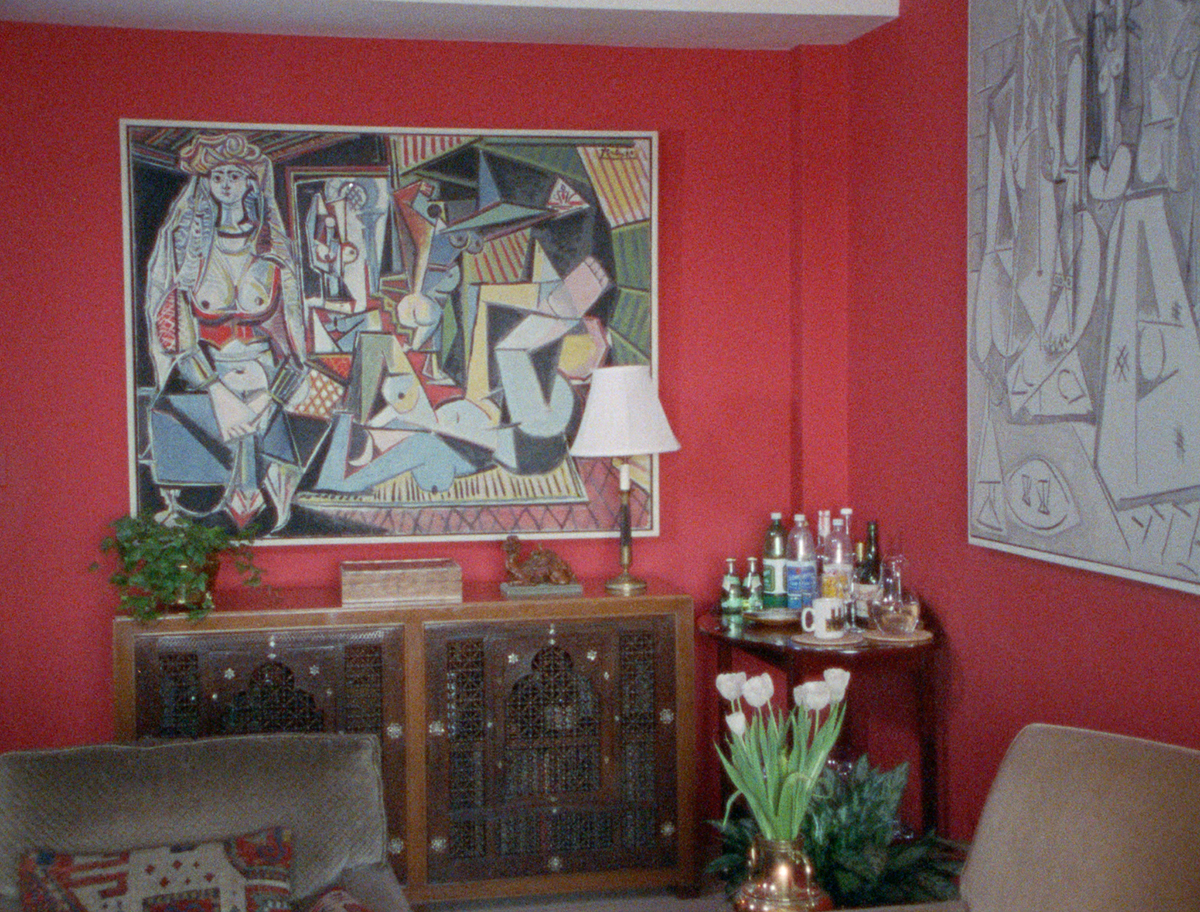 The Ganzes were also known for the financial risks they took in order to fund their collecting habit. In 1956, Victor visited the legendary Parisian dealer Daniel-Henry Kahnweiler for the opening of a Picasso exhibition. Victor put in an offer to buy Picasso’s entire Delacroix-inspired “Femmes d’Alger” series (1954–55), and Kahnweiler, seeking to sell the group as whole, accepted. After buying the 15 works for $212,500, Ganz later sold off 10 to dealers for $138,000, in an attempt to recover some of his purchase price, keeping the best five for himself.

Such a purchase was a gamble, but many have recognized just how much it paid off. “For anyone who wants to know this period, they must look at Victor and apply his lessons,” the New York dealer Leo Castelli once said. Where the works have gone in the years since attests to Castelli’s remarks.

One of the remaining five “Femmes d’Alger” works that Victor held onto was Version ‘O’. In 1997, it went for $31.9 million to London dealer Libby Howie, who is said to have purchased it on behalf of buyer in Europe. Years later Version ‘O’ set a record when it sold for $179.4 million at Christie’s New York in May 2015, making it the most expensive work at auction at the time. Purchased by a member of the Qatari royal Al Thani family, that painting still holds the world record for Picasso and is now the second-most expensive piece sold at auction. Version ‘H’ sold for $7.15 million in 1997, and is now owned by the Nahmad family in Switzerland, and in 2020, Version ‘F’ sold for $29.2 million.

Fifteen years before the “Femmes d’Algers,” Victor bought his first Picasso, Le Rêve, a 1932 painting of the artist’s sleeping early muse and first mistress Marie-Thérèse Walter. In 1941, he paid $7,000 to buy it from Kahnweiler. “It was a brave purchase,” Lash said. Five decades later, it sold at Christie’s for $48.4 million to Austrian financier Wolfgang Flöttl, who later peddled it to Steve Wynn. In 2013, mega-collector and billionaire hedge-funder Steven Cohen bought it from Wynn for $155 million. 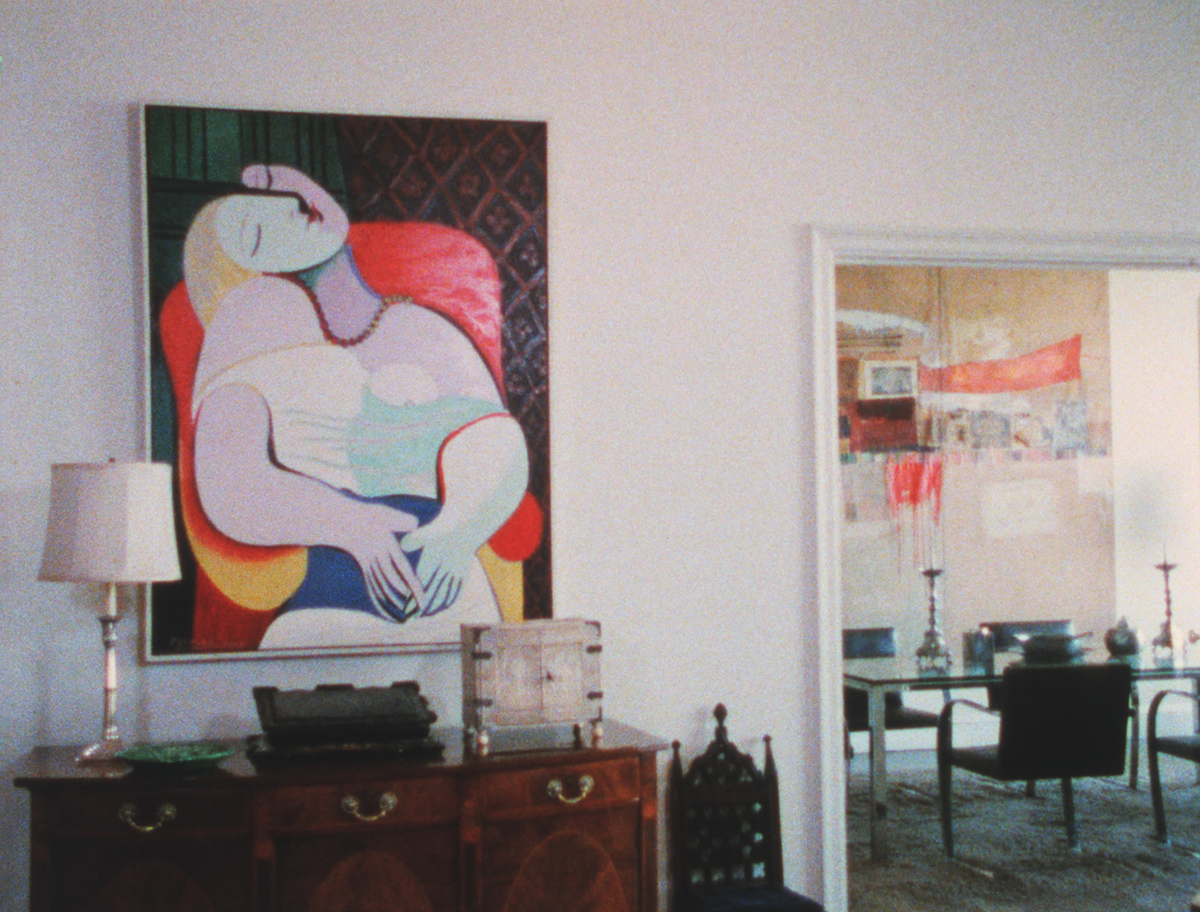 Picasso’s The Dream in the Ganz apartment, from the 1999 documentary Victor and Sally Ganz: Discovering Eva Hesse.

Six months after he purchased Le Rêve, Victor married Sally, and they continued their Picasso collecting habit. At one point, they even met the artist. They would go onto to become the top private lenders to the Museum of Modern Art’s 1980 retrospective on Picasso.

Since the 1997 blockbuster sale at Christie’s, which was guaranteed by London-based investor Joe Lewis to the tune of $168 million, the Ganz provenance has acquired a rare level of prestige. “Ganz became something of a brand that people were proud to own,” Lash said.

Mapping where works that came up for sale at that fateful 1997 auction attests to this. Woman in a Chemise in an Armchair, a 1913–14 Cubist portrayal of the artist’s young mistress Eva Gouel, was bought by cosmetics tycoon Leonard Lauder for $24.7 million that evening; it now resides at the Metropolitan Museum of Art, as part of a gift of the collector’s major Cubist holdings. Le Marin (1943), said to be the only male portrait by Picasso in the Ganz collection, was sold for $8.8 million, and was given a $70 million estimate when Steve Wynn put it up for sale at Christie’s in 2018. (It was withdrawn shortly before the sale after being damaged.) 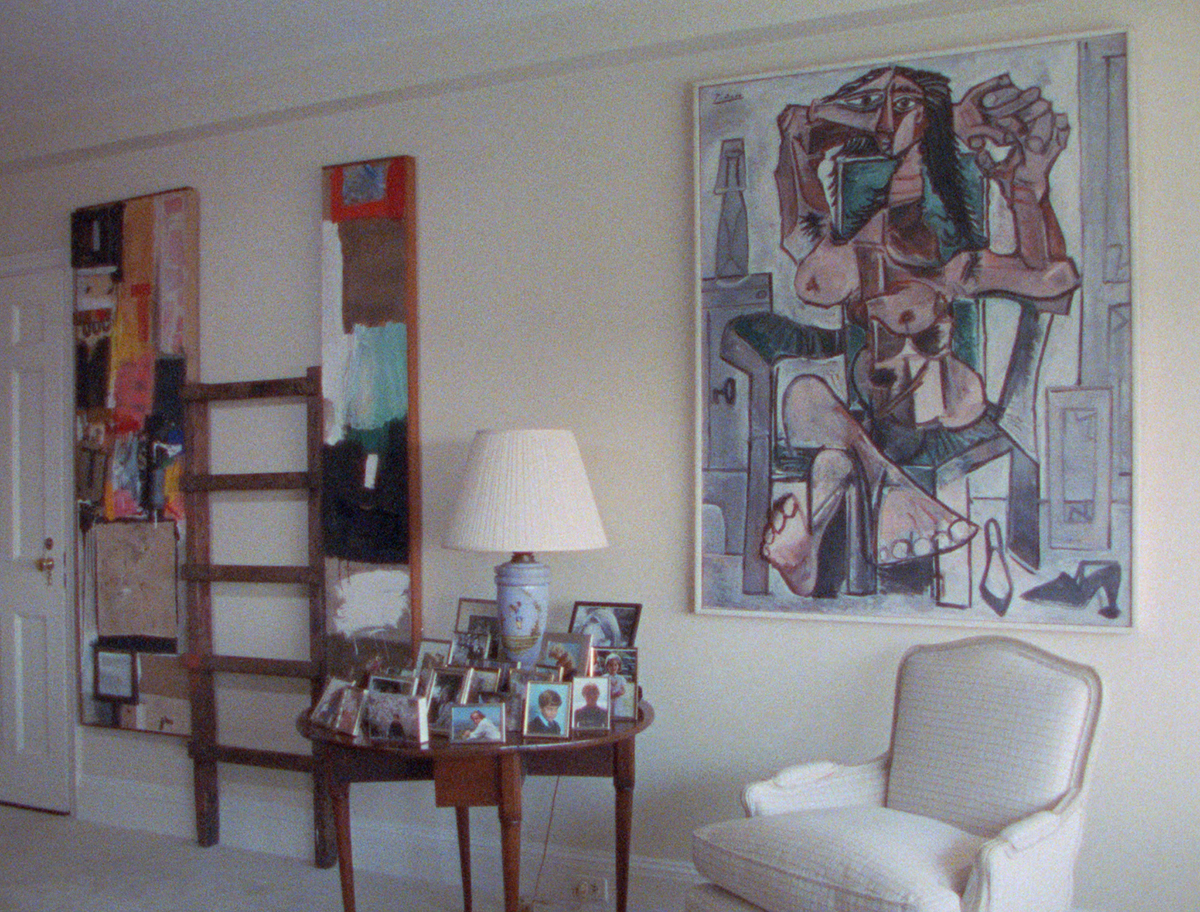 A Rauschenberg “Combine,” at left, and Picasso’s Seated Woman, 1955, in the 1999 documentary Victor and Sally Ganz: Discovering Eva Hesse.

By the 1960s, the Ganzes could no longer afford Picassos, so they shifted their focus to cutting-edge American artists. They began pursuing works by Jasper Johns and Robert Rauschenberg, and they went on to add major examples of art by these postwar pioneers to their holdings. In 1964, for example, they bought Johns’s White Numbers (1959), a painting featuring rows of numerals, from dealer Leo Castelli for $15,000. In 1997, it sold at Christie’s for $7.9 million. Sally remained so committed to Johns that the only work she bought after Victor’s death was an untitled double portrait by him from 1990, featuring the two abstracted faces of an old and young woman side-by-side. “I think for her it was as much about memory and youth and old age than it was about anything else,” her son, Tony Ganz, said in an interview with CBS ahead of the Christie’s sale.

Yet the Ganzes played the greatest role in the career of Eva Hesse, whose work was not widely collected when they first began buying it. In the 1999 documentary Victor and Sally Ganz: Discovering Eva Hesse, Victor recalls coming across the young artist’s minimalist work for the first time in 1968 in New York’s Fischbach Gallery. “I was charmed … fell for her immediately,” he says in the film.

Just two years later, in 1970, Hesse died of cancer at the age of 34. The couple had grown to know her personally during the course of her short career, and felt compelled to continue supporting her art afterward. “Her life was such a brief one, and I also wonder in what direction she would have gone in today’s world,” Sally said in an interview just before her death. “She was a very restless creative, intense spirit.”

At some point in the late 1960s, they bought Eva Hesse’s Unfinished, Untitled or Not Yet, a 1966 sculpture made of nine dyed fishnet bags, clear polyethylene, paper, sand, and cotton string. At Christie’s it sold for a then-record price of $2.2 million, against an estimate of $700,000. Another of Hesse’s sculptures, Vinculum 1 (1969), made of two fiberglass ladderlike structures consisting of rubber tubing and metal screens, sold in that same auction for $1.2 million, marking the artist’s second-highest price.

“It was at the urging of Victor that the Whitney turned toward a whole new group of artists.”

Victor brought his staunch advocacy of young, edgy American artists to one of the museums with which he was affiliated, the Whitney Museum in New York, where he served as trustee from 1977 until his death in 1987. As a member of all three of the museum’s acquisition committees, he advocated for art by postwar giants, then up-and-comers, like Rauschenberg, Johns, and Stella at a time when the Whitney was still primarily focused on buying modern art. To Victor, the museum was behind the curve. “At that point, the Whitney was just beginning to pay attention, and I think it was at the urging of Victor that the Whitney turned toward a whole new group of artists,” Weinberg said.

While at the Whitney, the Ganzes became close confidants of Flora Biddle, an heir of the museum’s founder Gertrude Vanderbilt and a lifetime Whitney trustee. When it was time for Biddle to take over after her mother Flora Whitney Miller served her final year as president of the museum in 1966, it was Victor who urged the reluctant heiress to step up. “He said we had every opportunity to be a great museum: This was America’s moment in contemporary art, and the Whitney wasn’t looking,” Biddle recounted in a 2015 interview with Vogue. “We hadn’t bought the best artists when they were young and cheap, and we’d probably never be able to catch up now.” 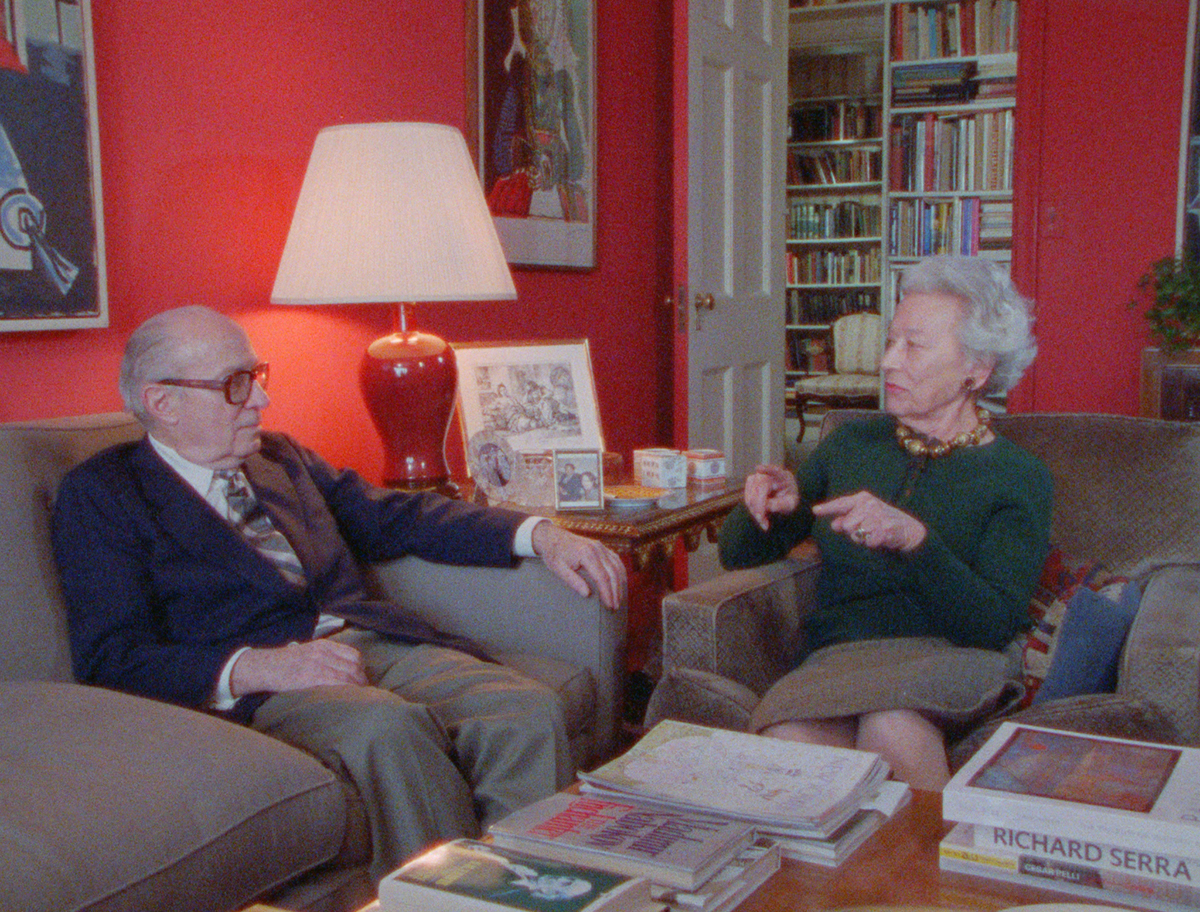 “My father, who was quite rigorous intellectually, hated decorative art,” Tony Ganz once remarked. A commitment to challenging art would come to define Victor’s collecting style. Among their holdings were two Picasso paintings that had dark palettes: Cat and Bird (1939), featuring two snaring animals, which sold for $8.2 million at Christie’s, and Still Life with Sausages (1941), which sold for $1.4 million. At the time, collectors still preferred paintings from Picasso’s Blue and Rose Periods, and the Ganzes’ willingness to venture into unmined parts of his oeuvre showed that they didn’t only pursue art that met the tastes of the status quo.

Periodically, this also meant buying art with lofty concepts behind it. Among the formative works the couple gave to the Whitney was Claes Oldenberg’s 1966 sculpture Soft Toilet, a work that Weinberg described as the artist’s “answer to Duchamp’s toilet.” It was at one point placed in the couple’s New York apartment dining room. (“No pun intended, but it was the butt of a lot of jokes,” Weinberg said with a laugh.) The Ganzes also gave two works by artists with whom they’d become friends: Frank Stella’s Dove of Panna (1977) and Jasper Johns Studio II (1966).

“These were not people who were decorating their house,” Weinberg said. “They were very focused, they were very rigorous.”

Because the pair took risks, going after works outside of conventional taste and often at prices beyond their means, the Ganzes would come to represent a rare ilk of tastemakers, setting an industry-wide high for years to come. “I think they educated the market,” Lash said.