David Byrne is not prone to idleness. Since cofounding the Talking Heads—the New Wave band that launched him to fame—Byrne has founded a music label, released an extensive body of solo albums, and written two books, including 2012’s How Music Works, which blends music theory and autobiography. But when the pandemic forced New York into lockdown, Byrne returned to his roots in a different field: visual art.

Over the past seven months, Byrne took up drawing, and while he said his art is not explicitly about Covid-19, the activity became a way to confront, in a roundabout way, more existential threats—anxiety, mortality, boredom. So far, he has created around 100 hand-drawn ink images, 50 of which have been collected in the series “Dingbats,” which is now being sold online by Pace Gallery, his representative.

The works were originally intended as dingbats—filler doodles used to break up blocks of text—for Reasons to Be Cheerful, the online magazine Byrne founded in 2018 through his Arbutus Foundation. The drawings cost $3,000 each, and all proceeds from the sales will benefit the publication’s writers, editors, and various contributors.

The illustrations toe the thin line between irony and sincerity. Byrne said they make him laugh, which is partly the point. In T.M.I, a long-limbed figure is flatted by a rectangular sheet. Nature Man, which depicts a mountain range with a man’s face, could be interpreted as a comment on climate change, according to the artist. “They express those feelings that you sometimes don’t want to say to one another,” he told ARTnews.

Earlier this week, ARTnews spoke via Zoom with Byrne, who was in his apartment in Manhattan. The interview has been edited and condensed.

ARTnews: You’ve also been promoting the release of Spike Lee’s film adaptation of your stage show American Utopia, which hits HBO this week in the U.S. What’s it been like to split your time between a huge production like that and small-scale drawings like these?

Byrne: I’m used to juggling different things. It actually works out well for me. There’s only so many hours you can put into one thing before the sponge is run out for the day. It was easy to put on the other hat for a bit and see what needed needed to be done for the movie release. Things like [“Dingbats”] are long-range projects. They started as an assignment, which is nice as I like assignments, and I was given a lot of freedom. They emerged to be a kind of expression during the pandemic. There’s humor to them, but there’s also a lot of locked-down feelings, the kind that come out when you draw. Feelings that you haven’t yet put into words.

What was the beginning of lockdown for you like? When did you realize we were in the “new normal” for the long haul?

It was incremental. I remember in the beginning, how we thought that it was going to be three or four weeks, maybe a month and a half. And I thought, “Wow! That’s a long time, a month and a half. I better get some toilet paper and some groceries.” During that time we realized: “Oh, it’s going to be a lot longer.” And then we realized truly how longer is ahead. We thought that the show that was filmed would be in theaters and back on Broadway now, which seems laughable. We continue to live life, even in a pandemic, as you think back and try to remember what it felt like at the beginning, to remember if we knew what kind of world we were moving into.

How did you think up the surreal imagery in the drawings?

A fair amount of the drawings have faces and bodies, in ways that are sometimes grotesque, but I hope grotesque in a funny way. We’re not talking about Goya here; there’s a bit of humor. I can only assume some of my focus came from the fact we are now partly imprisoned by our bodies. The illness—the pandemic—has limited our bodies, limited our movement, limited our interactions, limited our social connections. Our bodies are revealed to be essential to us, part of who we are. We tend to think, “Oh, no, life is in the mind, and that’s where we reside.” But we can’t separate the two. That becomes apparent during this time.

There’s one drawing in the series, A Balanced Life, which has a figure balancing household items on its head.

We’re trying to hold all of that stuff all the time and not fall over. The drawing is about keeping our lives, our things, our various odds and ends from falling to the ground and smashing to bits.

Then there’s Supply Chain, which is more overtly political.

[Laughs] Ah yes, the train made out of vegetables. During the pandemic we became so much more aware of the things we rely on and our reliance on all these connections across the country, across the world. Boats and ports and planes, warehouses—if one of those gets disrupted, then we can’t get certain things. Luckily, most vegetables and groceries are still available to us, though I think of all the outbreaks in the meatpacking industry. In my little world, I have friends who tried to get bicycles, and they couldn’t, or they had an old bike and wanted to get it repaired, but the bike store couldn’t get the parts. There’s these little things you forget about that get revealed. You forget the people involved. 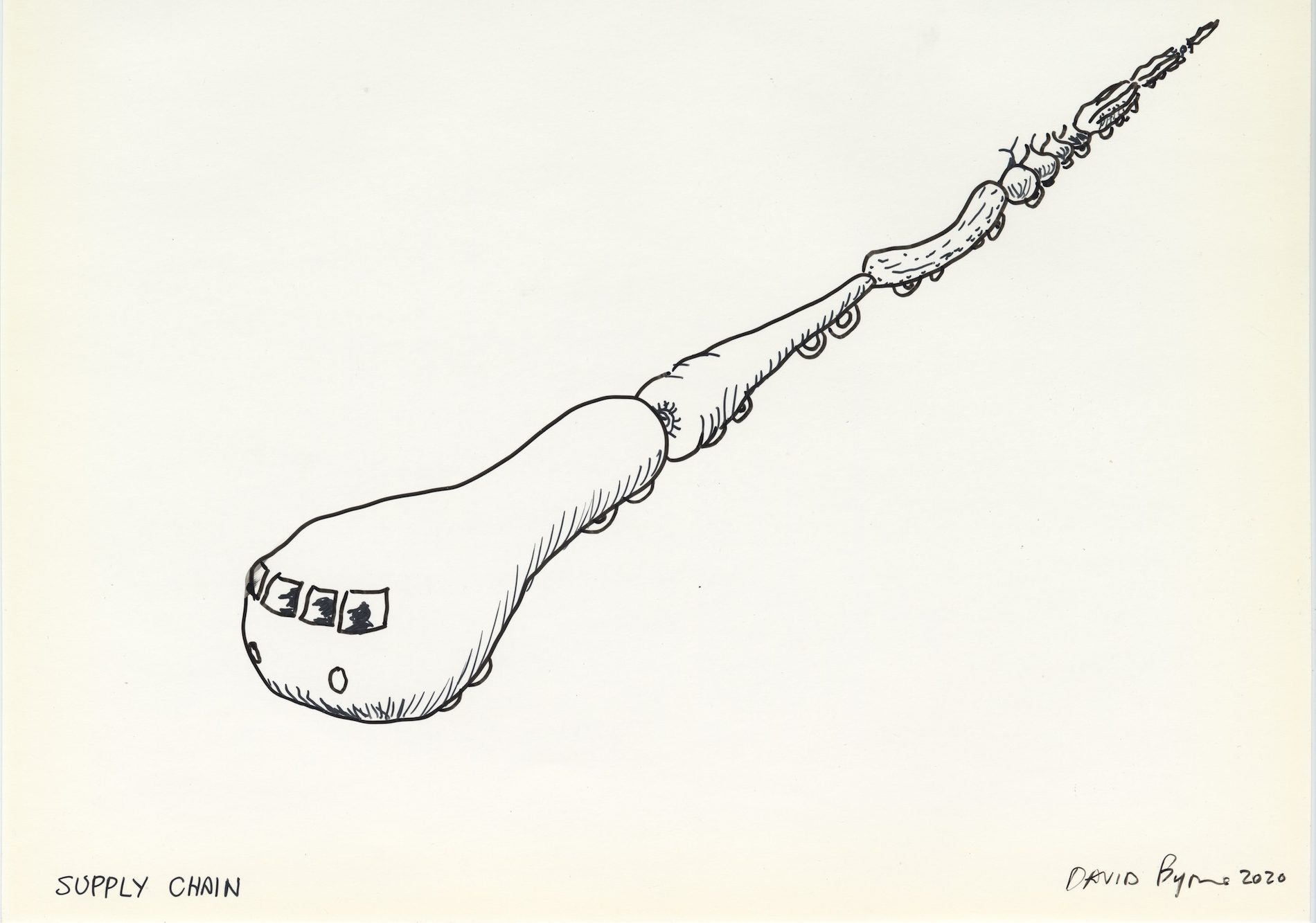 What’s your process like when you sit down to start a new drawing?

It starts as an idea, and then I take time to plan it out. I had one yesterday, of a very large baby running roughshod over a very small town and squishing little houses—a Godzilla baby. So I start with a concept and then sketch it out. Then I ink it in, which I learned from graphic designers and illustrators. The question is how far you take it to let it look filled.

What’s the meaning behind the baby?

Well, my daughter has an infant, and they was visiting her the other day, and therefore the apartment is a mess. I thought, “I could take that image to another place and give it another meaning.” Quite a number of us see Trump as big baby, let’s say, running roughshod over folks. But we can also see ourselves as the baby. We all have our infantile desires and motivations that surface every once in a way and we trample over not just tiny houses, but over our friends and loved ones and relationships.

This year, Reasons to Be Cheerful launched “We Art Not Divided,” a special project aiming to bridge gaps between Americans ahead of the general election. Don’t you find that task daunting?

Of course! When my colleagues first proposed that I said, “Are you kidding? Do you read the newspapers? Can you show me examples of what the stories can be?” And they did. A short time later, they said, “Look, here’s a bunch of stories, here are things that are actually happening.” And I said, “Alright, that’s kind of amazing.” But it’s still a battle every morning. I look at the papers and feel like, oh god, people are at each other’s throats. It’s like we’re on the verge of armed warfare with each other. Publishing these stories of people who have gone against that tide is pretty necessary. It’s sustaining for people to hear this, instead of the constant barrage of negative things which by human nature we are more attracted to.

You said in the recent Esquire interview with Spike Lee that “as citizens we have a responsibility to engage.” How do you apply that idea to yourself as an artist?

That idea has been a gradual incremental shift in my life, over many years. I’ve tried to some extent to remain nonpartisan with the idea that, if we can keep talking to each other, that’s how we might move forward, though gradually I’ve come to feel that yes, at my age, I can afford to be more engaged and speak out. I’m not struggling with my career in the ways an emerging artist might be, so I have the luxury to approach these various topics. But it is a kind of balancing act. Doing art, whether it’s music or these drawings, approaches social and civic issues.

It’s a tricky thing. I think when art becomes didactic it loses its power. So the question becomes: How to engage, and in what way? Sometimes one’s art is the right way to express an idea. Sometimes it might be better to write an op-ed opposed to creating a painting. It’s a journey of discovery, figuring out how to engage without losing the integrity of the work. It’s an ongoing thing. Sometimes I nail it, sometimes not.

You started as an art student at RISD and then took an incredible detour into music before returning to visual arts. What do you make of that trajectory?

From my point of view, I managed to get back into visual expression when I started creating music videos in early ’80s. The detour was huge, but it wasn’t as long as it might seem. Throughout time, my performances started to become more performative, visually thoughtful and visually engaged. I’m not even sure how long it was ago, let’s say 15 years, that I really started drawing again. I was drawing these trees sort of like diagrams in the way they do in books of evolution, which I was inspired by. And I used the drawings to imagine connections that might be slightly preposterous, which then started to seem not totally wrong or ridiculous. I like drawing more than large-scale expression because it seemed like a direct expression of what was in my head, as it tends to be. I think viewers sense it too. Maybe it’s because drawing is a  preliminary expression, the first expression of whatever is going on in the artist’s head and heart. You can feel a closer connection when looking at a drawing rather an artwork that has been taken to the next level.