Daniel Sallick is board chair of the Hirshhorn Museum and Sculpture Garden in Washington, D.C., and a founding partner of Subject Matter, a creative advocacy firm based in the city. The views expressed here are his own.

The art world has been invigorated in the past year by the notion that equity and inclusion should be mandates rather than mere abstract concepts. But while we’re good at hashtags, putting on fundraisers, and lifting up what we believe should be ideals, it’s time to walk the walk and lobby Washington to usher in a much more ambitious and nimble approach to the federal government’s role in the arts. We can’t continue to wait and see which way the political winds blow. We must summon the art world’s collective power to set a new and bold agenda for making access to the arts a fundamental component of education in America.

There are many paths to progress here, but the one that makes the most sense, and could be pushed forward relatively quickly, would be to introduce a progressive tax to fund the arts in our schools and communities. A 1 percent federal tax on sales of artworks priced over $10,000—let’s call it a “Warhol for All Tax,” to apply to transactions at the higher end of the market—could generate hundreds of millions of dollars a year to fund cultural education efforts. The money from this tax could go into a large-scale grant fund to create and expand art and culture hubs in the nation’s underserved communities. It could be administered by a newly created commission of experts with real-world experience in arts education. Term-limited appointees could identify opportunities and then unleash federal funding to create and sustain arts programming across the country.

There is ample precedent for this type of approach. America’s highways have been funded by federal excise taxes on gasoline since the 1930s, and portions of the Affordable Care Act are funded by taxes on insurers. A federal tax on art sales would be a progressive extension of that kind of idea while working toward a different sort of infrastructure project for America. Rather than building bridges and assisting in access to healthcare—both worthwhile endeavors—we would be feeding minds and souls.

Having served as an aide to House Democratic Leader Dick Gephardt on Capitol Hill in the 1990s, I understand that this issue will need to find its place in the pecking order of America’s many challenges—but I believe it can work. As chairman of the board of trustees of the Hirshhorn Museum, I also know the power of art and the important role it can play. Access to the arts, especially for youth, is a key component to the kind of development needed to navigate and accelerate in a 21st-century economy. To that effect, investing in arts education now will produce dividends for years to come.

Daniel Sallick speaks at a gala for the Hirshhorn Museum in 2018.

The art world and art collectors are good at many things: buying and selling art, supporting institutions, and, for the wealthiest few, even building private museums to showcase shared passions. However, we have collectively failed to advocate for enough federal funding for the arts to reach those who need it most, primarily children in lower-income areas, both rural and urban, and especially in communities of color. Progressive investors in the art world—many of whom are among the nation’s wealthiest 1 percent—know we haven’t done enough.

Neither has the public sector. Let’s start by looking at the meager funding of the National Endowment for the Arts. The federal allocation for the NEA in the 2020 fiscal year was $162.5 million, or .003 percent of the federal budget. That’s a rounding error in the budgets we’ve seen of late. The effort I envision would be a public-private partnership in which we recognize and harness the collective power of the art world with funding that draws from more than just meager public money and philanthropic largesse.

While I wring my hands over what we’re not doing, I also revel in what the art world has done so well for so long. Visionary philanthropists have financed and helped support incredible projects run by dedicated staff and volunteers that could be expanded and replicated for the greater good. But we need the reach and scope of the federal government if we’re to address the most stubborn inequities in our society.

The pandemic has laid bare how much of our entire system remains one of haves and have-nots, and we in the arts community must lead efforts to change that reality as it persists. Great swaths of America are essentially “art deserts,” without adequate school funding for arts education or institutions to help cultivate culture beyond the education system’s bounds. And as we all know, disadvantages early on follow children throughout their lifetime.

Many collectors and even philanthropists in the art world will reflexively oppose a tax like this, arguing that it would work to chill the market. That’s a narrow view. Such a tax could instead energize the market by building into buying and selling art a form of philanthropy. When a sense of novelty can help an NFT sell for $69 million, imagine what could happen if a sense of novelty could unleash significant and meaningful changes for the public good.

I have discussed this idea with people in the art world and with some of my former colleagues on Capitol Hill. Not a single person tried to dissuade me as they lent invaluable insights to help shape what I ultimately suggest here is necessary and also very possible. One longtime art dealer noted that, while a 2 percent tax would have a bigger impact, 1 percent would be easier for collectors to swallow and wouldn’t work to slow the market. A museum director mused about how such a tax could enable more ambitious partnerships between museums and schools, an evergreen goal that has lacked the funding to scale up. A former Hill staffer noted that, while funding for the arts has for so long taken a back seat to other priorities—especially during times of deep federal deficits and great national need—a new funding source with ample precedent actually seems viable today, especially given a political climate in Washington that is welcoming progressive ideas to tackle inequities in all facets of life in America today. 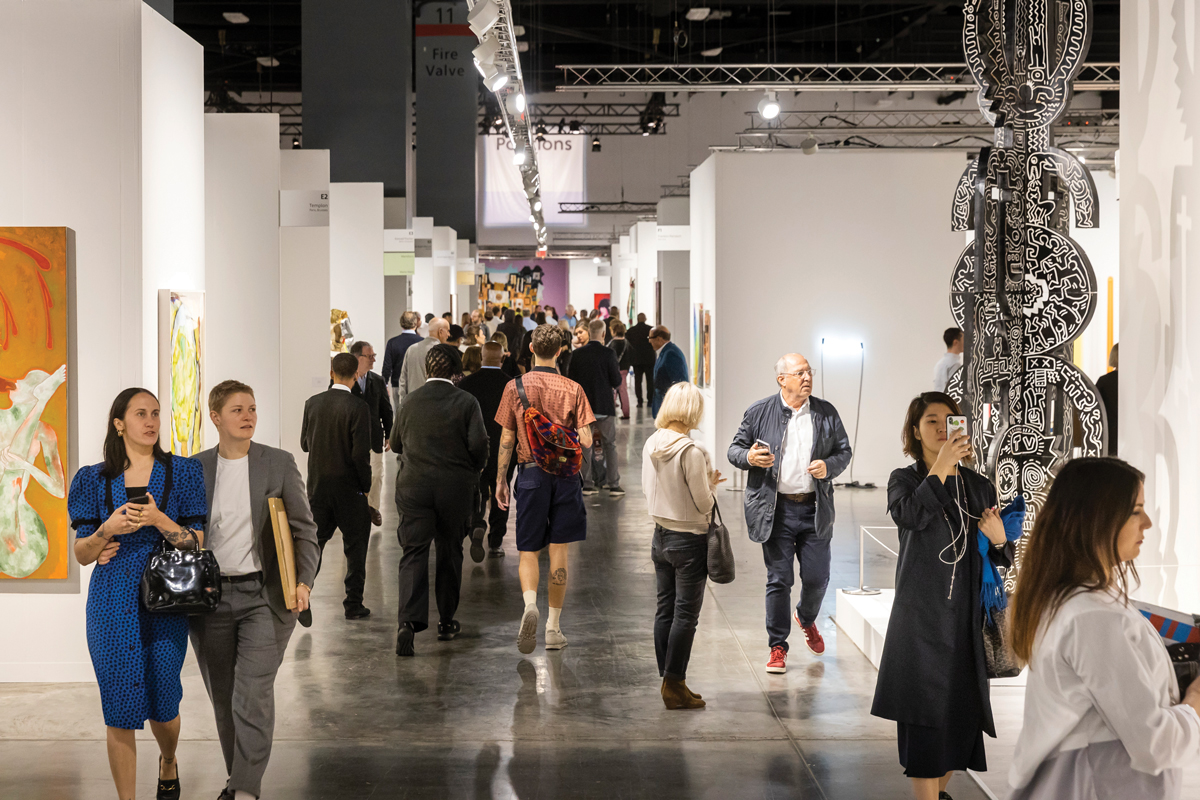 Attendees stroll the aisles at Art Basel Miami Beach in 2019. A tax on sales at the fair could lead to welcome change for the future.

As I think about the possible, I project forward to Art Basel Miami Beach in 2022 and envision the bright Florida sunshine and the energy of new ideas and fresh perceptions. I hope the pandemic by then is a foggy memory, with the art market back to its pre-pandemic heights. And with every transaction above $10,000 in every booth, I try to imagine the potential of what just a 1 percent tax could support. That prized $200,000 acquisition would cost a mere $2,000 more, and it could help fund a new program or put a dedicated art instructor in a classroom with schoolchildren starved for art. Or maybe a high school student could learn how to use a 3D printer to create a sculpture. Art expands the human experience for all of us, and with this tax, the purchase of art would create new pathways for expression.

Going on estimates of the size of the U.S. art market, the introduction of a 1 percent tax in a healthy year would bring in more than $250 million to seed America’s creative future. And the 117th Congress—governing during a crossroads moment—could help make this happen if enough of us band together to present a collective case by way of lobbying and organizing our networks (of artists, collectors, dealers, museum administrators, nonprofit organizers) to support this cause. We need to stop talking in abstractions about equity and inclusion, and instead actually do something—and a Warhol for All Tax could be that something to help art and culture flourish.

As Andy Warhol once said, “They always say time changes things, but you actually have to change them yourself.”