After the eviction of Ozo, Laycon is among the last five BBNaija contestants. In a post on our socials, we asked our followers who were his fans the reasons they stanned the man, and trended #WhyWeLoveLaycon at the time.

Big Brother Naija boasts a monolithic power over consumers of reality television shows in this part of the world.

This year’s edition has arguably been the most popular. Perhaps due to the global lockdown. On social media, names of contestants and phrases trend like it’s nothing; to announce a disqualified contestant, a national paper tagged a tweet as “breaking”; elsewhere, on the streets, conversations twist in and out of each other to reveal the power of the show. You’re either for it or against it –and even in the case of the latter, you’re inundated by the zeal of the former, especially fans of a particular contestant, who keeps the boat rocking, so to say, in the absence of the person who’s locked in the house with little contact to the outside world.

Laycon comes to mind. The slight looking man went into the house a rapper who, although had a revered cosigns from Reminisce, had little by way of mass appeal or critical acclaim. Simply put, when we mention Laycon, most people don’t recall the ingenious spitter who dropped bars. They recall, to BBN’s acclaim, the love triangle with housemates Kiddwaya and Erica, the words of affirmation, the simple outlook, the weird dresses… that picture of Laycon and Nengi, close and partying, our man’s hands on the lady’s curvy person. “At this moment Laycon knew there was more to life than… ” someone commented. We laughed.

Reality shows are meant to depict the humanity and (perhaps more importantly) personality of each contestant. Through carefully plotted scripts and other times winging it, depending on whoever’s contesting, the aim is to make viewers love them enough to keep them on the show at the expense of their personal cash and support.

Laycon, through his stay in the house, has inspired massive support for himself. For a cult of followers, he’s the most humane BBN contestant ever. For others, it runs deeper into sociopolitical context. We take all angles into consideration compiling these reasons why people love Laycon as they do.

“I love him simply” 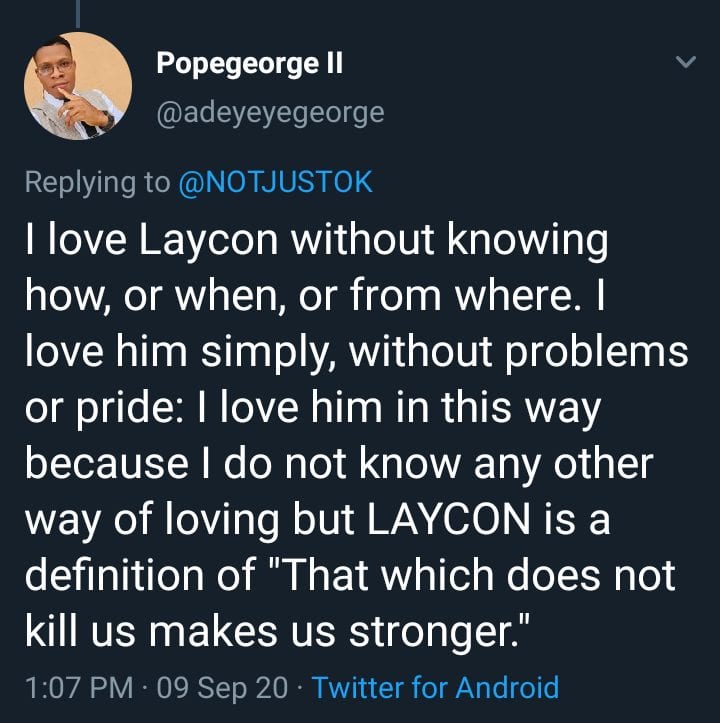 There’s something canonical about love, that which makes all possible. According to this Notjustok follower, there’s something about Laycon that relates to himself on a deeper level. Quoting the popular quote “what doesn’t kill me makes me stronger”, he references Laycon’s everyman appeal; how, initially, his simpleness which seemed to be a step beneath the sophistication (in looks and demeanour) of his mates seemed to be suicide. But its possibly his biggest selling point today, aware as we are that a good grass-to-grace story is loved by all. 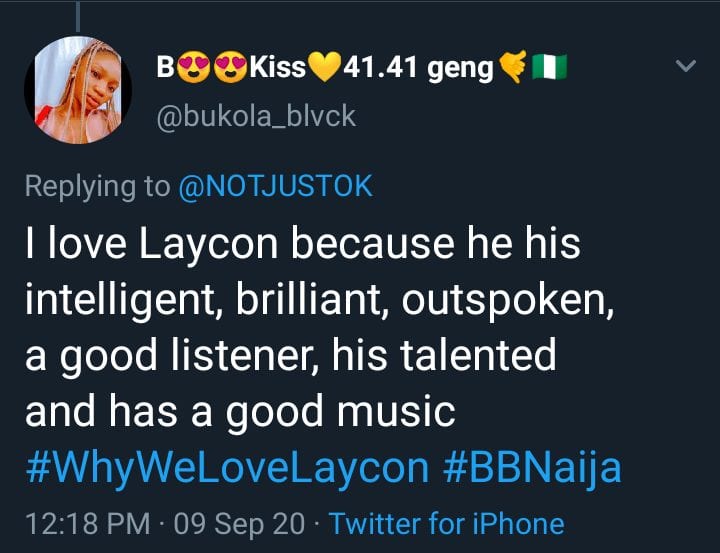 These adjectives reel like a Nobel Prize citation but it’s all Laycon. If you’ve followed his time in the house, you’re likely to have been face with his easy going attitude, a willingness to talk and listen. Communication makes and destroys, and being an artist, Laycon applies the power of gab to his advantage. The rest of that headline reads “he is talented and a good artist.” And that, my friends, is enough reason for support among a large section of his fans.

“A kind of man I can take to my mama” 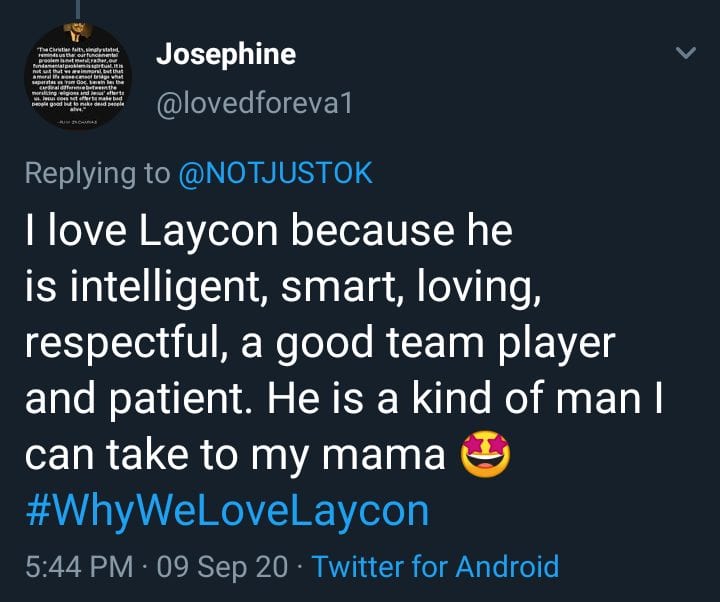 At first glance, you’d think a Laycon has nothing on fine boy Ozo or billionaire progeny Kiddwaya, at least when it comes to the ladies. But nah… Laycon actually has lots on them, given the storied account of his hard work and dedication, not to mention he’s expressive. When the lady above made the comment to our Twitter post, she must have known that Laycon was the type to, upon sighting her parents, prostrate keenly, hug them like his own, traded gist with her mother and before leaving, sing a 80s medley for the father. Endearing, that’s the word that will describe this Laycon perfectly.

“All the agendas they’re pushing… ” 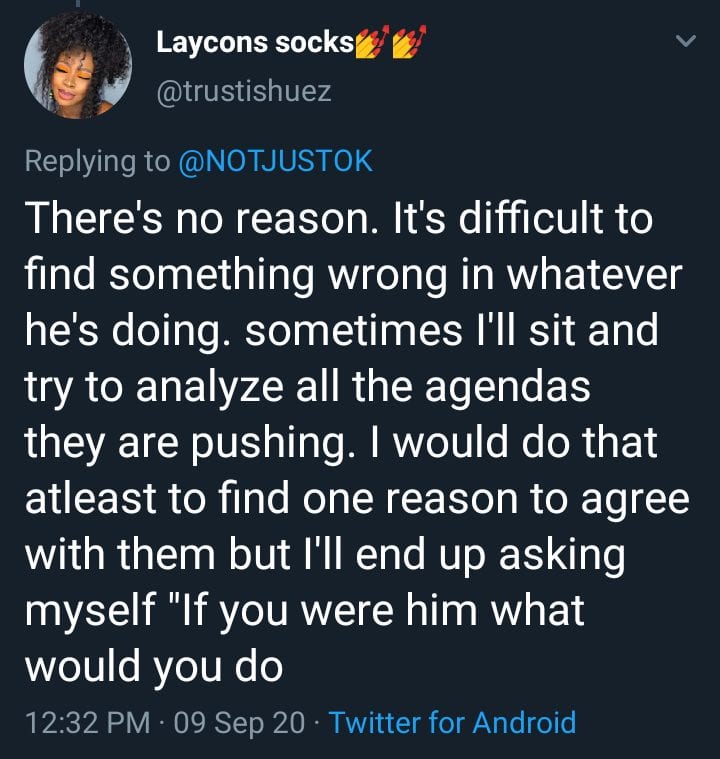 A reality show like BBNaija will pit fans of contestants against each other given whatever’s happening inside the house. Very quickly, the ‘underated’ tag begins to be slapped on some, just as it was on Laycon initially. But things have changed, don’t you think? Perhaps the most loved housemate, Laycon provides his fans the material to consistently decry his underated status while patenting the love from the entire fan base. In other words, being underated by everyone else but the most rated by the largest fan base. You dey feel me? 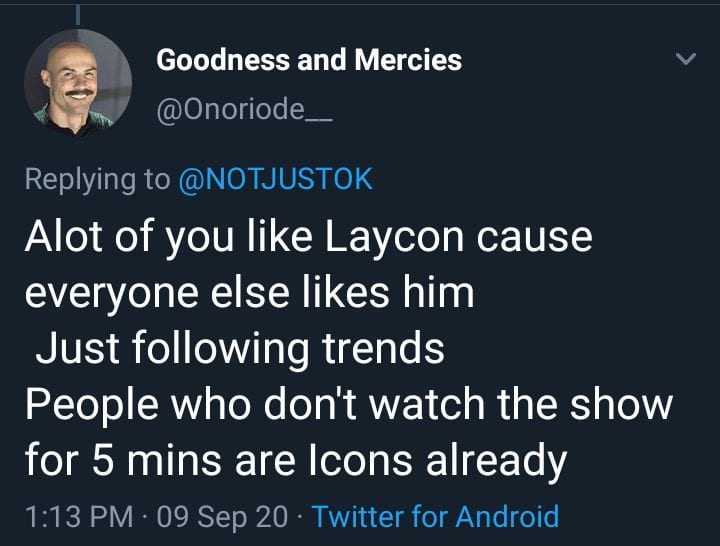 Obviously someone with the bald Cristiano Ronaldo pic on their display is likely a lover of trolls. But balance is essential in life and the man brings it. Do I, here, admit that I haven’t watched up to ten minutes of the current BBNaija season? But I know a lot about Laycon, much more than any other contestant and there’s no doubt it’s down to popular thought. Knowing that much about Laycon to be able to write this piece, you get that, subconsciously, I’ve seeped the words and glorious adjectives as can be found in the previous points. It’s therefore possible that many Icons like Laycon because many others do. In a game of life, numbers are a massive influence and a big influence on the fan base one of the most memorable and popular housemates in BBNaija history.